Production-spec Tata Gravitas to be unveiled on January 26, 2021

Tata’s new flagship SUV will be mechanically similar to the Harrier, but will get a third row of seats and distinct styling cues. 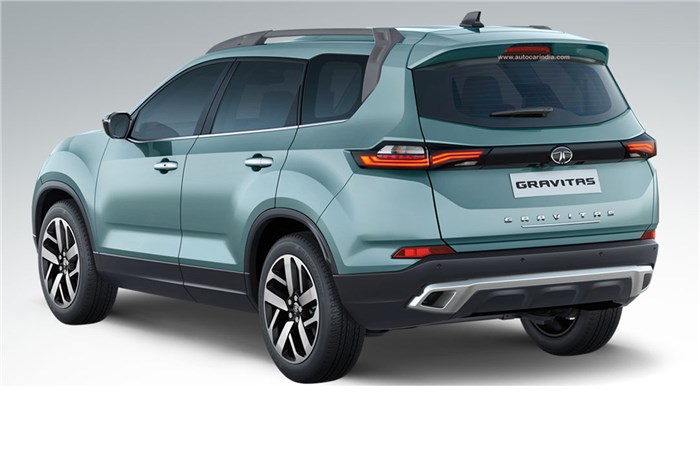 The production-spec Tata Gravitas  SUV will be unveiled on January 26, 2021. The Gravitas shares its underpinnings and mechanicals with the five-seat Harrier and will be positioned at the top of the Tata SUV range. Read on to know what to expect.

Tata Gravitas: What separates it from the Harrier?

The Harrier and Gravitas share Tata’s Omega platform. However, in order to make space for the third row of seats, Tata has added 63mm to the Harrier’s length and 80mm to the height – the Gravitas is expected to be 4,661mm long, 1,894mm wide, 1,786mm tall and have a 2,741mm wheelbase.

While styling differences between Gravitas and the Harrier at the front will be subtle, from the B-pillar onwards, Tata’s new flagship SUV will look distinct. A longer rear overhang and a stepped roof, along with additional colour options for the exteriors, will help set the Gravitas apart. A new alloy wheel design for the three-row SUV will also help distinguish between the two.

Tata Gravitas: What else does it share with the Harrier?

The 170hp, 2.0-litre turbo-diesel engine, which comes with 6-speed manual and 6-speed torque convertor automatic gearbox options, are shared between the two SUVs. In addition, the interior and features list are also expected to be similar.

The added weight from the enlargement and row of seats compared to the Harrier means that the Gravitas is expected to deliver less than the five-seat SUV’s 16.35kpl (MT) and 14.63kpl (AT) ARAI mileage figures. The three-row SUV is also expected to post slower times than the Harrier’s performance figures.

As Tata’s new range-topping SUV, the Gravitas will cost a decent premium over the Harrier, which is currently priced between Rs 13.84-20.30 lakh. Rivals will come in the form of the MG Hector Plus – available in six-seat (Rs 13.74-19.69 lakh) and, soon, seven-seat form – and the current Mahindra XUV500 (Rs 13.58-18.08 lakh*). Further competition in this space will come from the next-gen XUV500 and the seven-seat derivative of the Hyundai Creta.