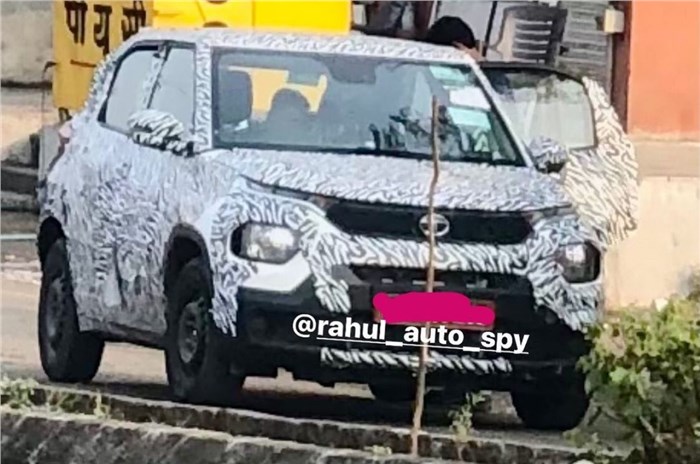 Production-spec Tata HBX (Hornbill) could look like a mini Harrier when it launches by March 2021.

Fresh Tata HBX images have surfaced online that provide new details on what the final production ‘micro SUV’ will look like. The small SUV (internal codename: Hornbill) was first showcased at the 2019 Geneva motor show as the Tata H2X Concept, and then in a closer-to-production form as the HBX concept at Auto Expo 2020.

As we’ve seen with spy photos earlier, the Tata HBX does look a lot like the concept it is based on. The new image clearly shows links to the larger Tata Harrier, especially in the split headlight setup and a new version of Tata’s signature ‘Humanity Line’ grille.

While the model spied has steel rims, higher versions will get alloy wheels. Overall, the final production model retains the upright shape, though expect some of the concept’s more extravagant details to be toned down. Expect the production HBX to be larger overall than the Maruti Ignis.

Although these images do not show the car’s cabin, previous spy photos had shown the interiors to be quite close to the HBX concept’s. Some details have been dialled down, but the final HBX will carry over the flat-bottom steering wheel (with audio and telephone controls), square central AC vents, and a dark, layered dashboard.

A 7.0-inch ‘floating’ touchscreen infotainment screen will sit high on the dash, just like in the concept. Other features that are expected with the production-spec HBX include a part-digital, 7.0-inch instrument cluster and automatic climate control.

As it’s based on Tata’s ALFA platform – same as the Altroz – the HBX is expected to be spacious on the inside and come with doors that open 90 degrees, to aid ingress and egress. Space for three at the rear is also expected to be sufficient, especially with the relatively flat floor.

The HBX is expected to share its two engine options with the Altroz. The first – an 86hp, 1.2-litre, three-cylinder naturally aspirated petrol unit – is expected with five-speed manual and five-speed AMT auto gearbox options. The second will be a 1.2-litre turbo-petrol unit making about 110hp with a manual gearbox. While the Altroz turbo is expected to get a Lumax-sourced dual-clutch automatic unit, Tata has yet to confirm if this will be available with the HBX too.

Tata cars, SUVs to be delivered in plastic “Safety bubbles”