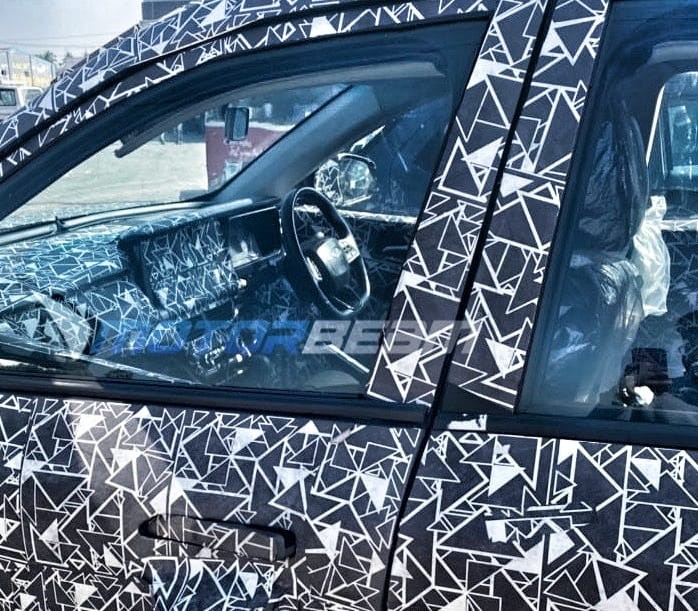 Mahindra has already begun work on the next-gen XUV500 SUV that will launch in the market sometime in 2020. While its arrival is still some time away, the model has been undergoing rigorous testing on Indian roads and has been spotted doing so once again. New spy shots that have surfaced on the internet reveal the new XUV500’s interior for the first time.

Just like its exteriors, the new XUV500 seems to be based on a clean-sheet design on the inside too. While the dashboard is yet to be seen completely uncovered, there are quite a few details that are still visible, giving us a hint of what to expect from the next-gen XUV500’s interior.

First up, the steering wheel seems to have an all-new design with a flat bottom – something not seen on any Mahindra product in India so far. The dashboard clearly seems to be split into three sections: there is a large instrument cluster area that will most-likely feature a TFT panel with digital gauges (at least for the higher variants); the centre area of the dashboard seems to contain a large horizontal slot for the infotainment system (the unit could be in the region of 9 inches or more); and two horizontal and simple looking AC vents are placed right below the infotainment screen. Below those are what look like controls for HVAC and other features. The XUV500 will come with a seven-seat cabin and there are talks of a key focus being on more cabin room, especially in the second and third row.

Earlier spy shots have confirmed that the new XUV500’s design will be an evolution of the outgoing model, with a more upright nose and a wide Mahindra family grille; there’ll be slightly smaller headlamps too. It will also get Mahindra’s signature vertically-placed daytime running lamps that first made their debut on the XUV300. The new XUV500 has the typical crossover-esque look when viewed from the side – while it’s got a fresh design for the front fender, the window line looks similar to the pervious-gen model, save for a pronounced kink on the rear door that is reminiscent of the detailing seen on the XUV300, the larger Alturas G4 and some SsangYong SUVs. The next-gen Scorpio is expected to sport a similar design detail as well.

The new SUV will not get the ‘cheetah claw’ door handles though, which are a unique touch on the current model. The second-gen XUV500 will feature flush-fitting door handles instead, which will still be unique its price band. Apart from enhancing its looks, these door handles are also expected to help improve the vehicle’s aerodynamics in general. However, it remains to be seen to what extent it helps Mahindra's next-gen SUV.

The new XUV500 will be sold with a more powerful 180hp version of the current model’s 2.2-litre four-cylinder turbo-diesel engine. The unit will be compliant to Bharat Stage 6 emission norms. A less powerful version of this same engine (140hp/320Nm) will see duty on the next-gen Scorpio and Thar. The engine will feature a DPF (diesel particulate filter) and a SCR (selective catalytic reduction), which will help it comply with the stringent BS6 norms. Gearbox choices will include a 6-speed manual and a 6-speed torque convertor automatic – just like the outgoing model.

Key rivals for the all-new Mahindra XUV500 will include the likes of the next-gen Hyundai Creta, the Tata Gravitas (a fellow seven-seat SUV), Kia’s Seltos and MG’s Hector. In the near future, there will be more entrants to the segment like the Volkswagen T-Cross and the Skoda Kamiq.

Additionally, there will be Ford’s version of the XUV500 set to arrive as well – it will share most of its underpinnings, interior bits with the Mahindra, but will come with a unique exterior design and sportier driving dynamics.