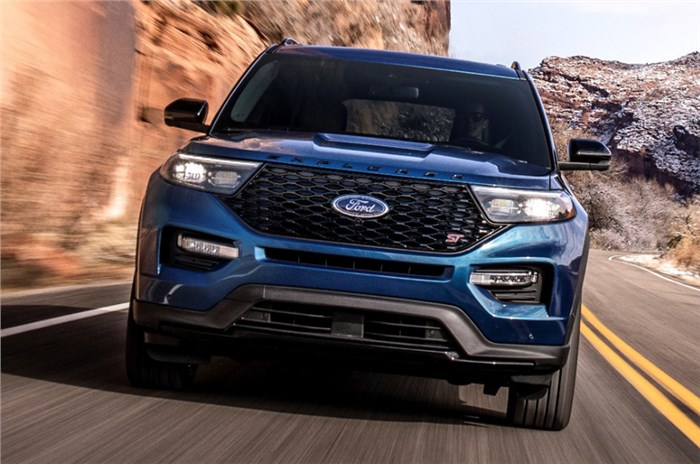 Image of the Ford Explorer ST used for representation only.

Mahindra and Ford today deepened the scope of their partnership by announcing the co-development of a mid-size C-segment SUV for which Mahindra will provide the platform and powertrain.

"Having identified several areas for joint development, both companies will continue to work together to develop products using common product platforms. This will reduce product development costs and gain economies of scale for both companies,” Pawan Goenka, managing director, M&M Ltd said.

In February 2019, Autocar India had exclusively reported about Ford's upcoming new SUV that will emerge out of the newly formed alliance with Mahindra. It will be based on the platform underpinning the next-generation Mahindra XUV500 (codename: W601). Though Ford will share the mechanicals and powertrain, it will not be a mere badge-engineering exercise. The Ford C-SUV will have an all-new exterior, a new interior, a slightly improved chassis and its ride and handling will be true to Ford's DNA. The Ford SUV will be built on the same line as the next-gen XUV500 in Mahindra’s Chakan plant.

Expected to be launched around end-2020, Mahindra’s W601 will be built on an all-new monocoque platform and is likely to have a longer wheelbase and a larger rear overhang, compared to the current XUV500.

Powering the W601 will be Mahindra's new-generation, state-of-the-art, 2.0-litre diesel that’s expected to develop up to a whopping 180hp. This BS-VI-compliant engine will be shared with Ford's C-SUV as well.

Ford is likely to provide the touchscreen infotainment system for use in both the SUVs. Sitting a level below its Sync3 suite, the new system is likely to get a screen similar to that on the lower-spec EcoSport, but with several upgrades.

In a joint statement, both carmakers said that the strategic alliance between the two is focused on leveraging Ford’s global reach and expertise, and Mahindra’s scale and successful operating model in India. Further areas of collaboration include electrification, distribution and product development. In October last year, Mahindra agreed to supply new small-capacity BS-VI-compliant petrol engines to Ford as part of their alliance.