Next-gen Hyundai i20 to get digital instrument cluster

When it arrives in India in 2020, the all-new rival to the Maruti Suzuki Baleno and Honda Jazz is expected to be far more competitive in terms of features and powertrain. 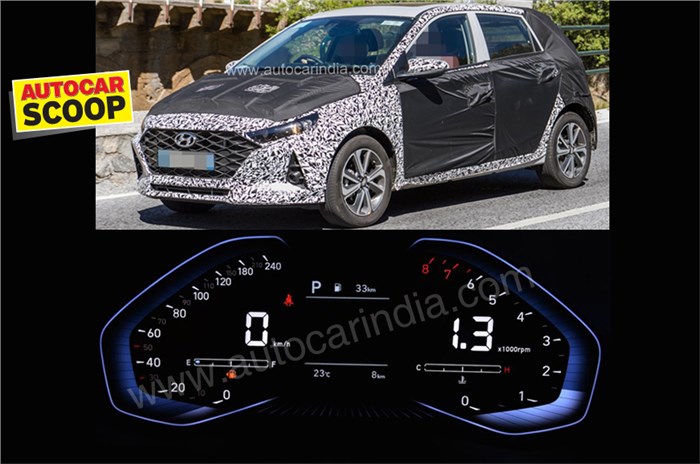 The third generation of the car that practically kick-started the premium hatchback segment in India – the Hyundai i20 – is set to arrive next year. In order to one-up its competition in our market, which includes the Maruti Suzuki Baleno and Honda Jazz, the upcoming next-gen i20 will come with a segment-first digital instrument cluster.

This new unit is expected to be similar to the one on the next-gen Hyundai Creta (ix25) that is also India bound, unlike the 5.3-inch part-digital instrument unit seen on the recently launched Grand i10 Nios. Whether this feature will be reserved for the top-spec Asta variant or available throughout the all-new i20’s variant line-up is still unknown.

Along with this new feature, we can confirm that the next-gen Hyundai i20 will also get the BlueLink connected-car tech that debuted on the Venue compact SUV and a new (larger) 8.0-inch touchscreen infotainment system. Other creature comforts and technology expected to continue from the current model include wireless charging, automatic climate control with rear AC vents, push-button start-stop, front and rear armrests and six airbags.

A couple of months ago, we reported that Hyundai is bringing its dual-clutch automatic gearbox to the next-gen i20. The Venue comes with a 120hp, 1.0-litre turbo-petrol motor that comes paired to a 7-speed DCT automatic – the same combination is expected under the hood of the new i20 too. Notably, the Baleno may not get a BS6-compliant turbo-petrol option and comes with a CVT automatic.

Additionally, Hyundai will continue to offer a diesel engine with its premium hatchback. The current model’s 90hp, 1.4-litre diesel unit will be replaced by a new 1.5-litre one. While this is the same motor that sits under the bonnet of the Kia Seltos, the engine in the new i20 will be in a lower state of tune – it makes 115hp and 250Nm of torque in Kia’s SUV. While Honda has confirmed that there will be a BS6 version of its current 100hp, 1.5-litre diesel motor, there won’t be a diesel-engine Baleno after April 2020.

The current, second-generation i20 has been on sale for over five years, though a facelift that launched early last year at the 2018 Auto Expo did help it stay abreast of rivals. Its sales may not match those of the Maruti Baleno, but the i20 still ranks as one of Hyundai’s highest sellers. Considering the raft of changes expected, the third-generation i20 may change all that.

Do you think the next-gen Hyundai i20 is worth waiting for? Let us know in the comments below.