New Hyundai Creta is likely to come with a 1.4-litre turbo-petrol as well as 1.5-litre petrol and diesel engine options. 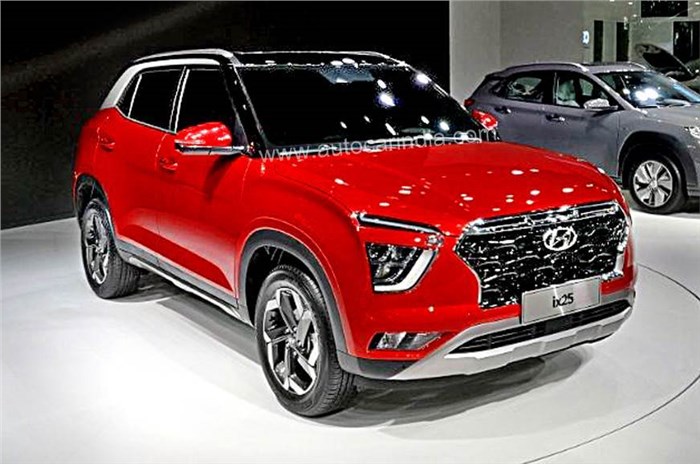 Hyundai took the wraps off the second-gen ix25 SUV earlier this year, at the 2019 Shanghai motor show. The new SUV is actually the successor of the model that we know as the Hyundai Creta in India. Since its global unveil, the new ix25 has been spotted being tested more than once, being tested – on Chinese soil, and also recently in India, on the outskirts of Chennai. While we know quite a few details about its styling and equipment, today, we bring you the second-gen SUV's dimensions and engine details.

As far as dimensions go, the new Hyundai ix25 (Creta) has a 4,300mm length, which makes it around 30mm longer than its predecessor. At 1,790mm, the SUV is 10mm wider as well; but it's 1,622mm high which actually makes it 8mm lower than the taller outgoing model that stands at 1,630mm (without roof rails). These dimensions are for the China-spec model, though. Which means the model could get more ground clearance when it launches our market.

As reported by us earlier, the next-gen ix25 will share the same BS6-compliant, 1.5-litre engine options as the soon-to-be launched Kia Seltos SUV. In the Chinese market, the new 1.5-litre petrol replaces the old 1.6-litre unit; while for India, the new Creta will come with the 1.5-litre petrol motor as well as an additional 1.5-litre diesel engine option. However, the big news is that the next-gen Creta for India could also come with a 1.4-litre turbo-petrol BS6 motor, just like the one seen on the Seltos GT-Line trim.

As far as styling goes the new Hyundai Creta gets a more rounded look as opposed to the angular design of the previous-gen SUV. It gets a split-headlight setup with slim LED lamps placed on the top of the main headlamps (projector units and LED daytime running lamps), which are in a separate unit. Just like for the headlamps, the new model gets a split setup for the tail-lamps as well. There is a strip of LED lights running across the width of the car, with separate units for brake and turn signals placed below.

On the inside, the new Creta is also expected to come with a premium cabin layout, in order to make it more competitive against newer entrants in the market like the MG Hector and the Kia Seltos. The large, vertically positioned touchscreen seen on the ix25 could make it to India as well – especially since the MG Hector SUV is also equipped with a similar setup. The next-gen Creta will come in not one, but two seating configurations with the five-seat variant coming to India first, followed by a seven-seat option some time later.

Key rivals to the next-gen Creta SUV would include the Kia Seltos, the MG Hector, Tata Harrier, Nissan Kicks, Renault Captur and the upcoming Volkswagen T-Cross and Skoda Kamiq SUVs.