They’re built on the same platform, share engines and gearboxes, and come loaded to the brim. But the new Creta could have a few tricks up its sleeves to one-up the Seltos. 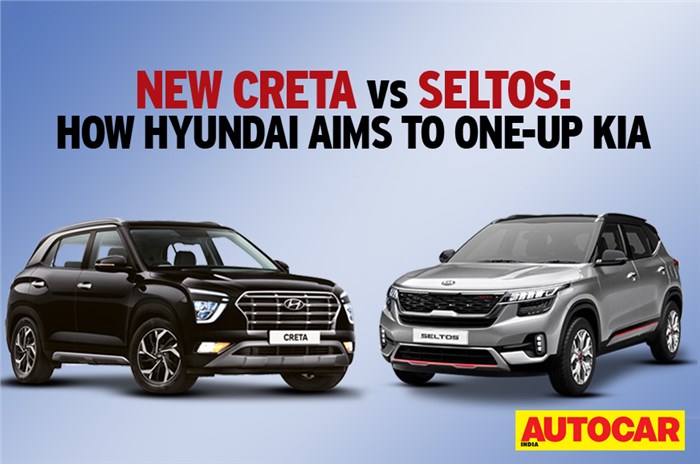 Ladies and gentlemen, brace yourselves for one of the biggest battles of 2020 – the all-new Hyundai Creta vs the Kia Seltos. While the Kia is the SUV to beat, the latter is tasked with taking the Creta nameplate back to the top of the midsize SUV sales charts, where the original model spent much of its time in its near-5-year run.

What makes the competition all the more interesting is that the second-gen Hyundai Creta, which was recently launched at an introductory price of Rs 9.99 lakh (ex-showroom, pan-India), and Kia Seltos are built on the same platform and also share engines. There are differences, however, that could send buyers either way.

We’ve listed down the commonalities and the crucial points of differences between the two SUVs.

2020 Creta vs Seltos: Dimensions and design

Since both SUVs are based on the same platform, they have an identical 2610mm-long wheelbase. The new Creta, however, is 15mm taller than the Seltos, but the Kia is 15mm longer overall and 10mm wider. In their top-spec trims, both SUVs get 17-inch alloy wheels.

But for all their similarities, the Creta and Seltos don’t look alike in any way. The Seltos sports neat and tidy lines, and while there are some flashy elements like the headlight LEDs that extend to the grille, styling on the whole is safe and understated. The new Creta, on the other hand, carries a more extroverted look. The three-part headlights and tail-lights, the squared arches and silver-finish C-pillar give the Creta a distinct visual identity but one that’s also polarising. It’s a big departure from the original Creta’s ‘please all’ looks, and it’ll be interesting to see how buyers take to the second-gen Creta’s look.

Radical as the 2020 Creta’s exterior is, its interior is fairly conventional in look. The low-set dashboard features a landscape-oriented, 10.25-inch touchscreen infotainment system positioned at the centre console. The driver environment is enhanced by the inclusion of a 7.0-inch digital display that’s a segment-first feature. Quilted leather upholstery has also been used to give the Creta’s cabin a more upmarket look.

The Kia Seltos interior is smartly styled, with the dashboard having the 10.25-inch touchscreen higher up, which is a more convenient position. The Seltos might lack the Creta’s digital dials but the MID is informative and includes a display for the blind-spot cameras – a feature missing on the Creta.

The cabins of both SUVs can be had trimmed in beige or black upholstery (depending on variant), and we expect the Creta to at least match the Seltos on its impressive cabin quality. Given that the wheelbase is the same, cabin room will be near-identical. The SUVs also offer two-step rear backrest recline.

An extensive features list has long been Hyundai India’s USP in this segment, and the all-new Creta is no different. Click here to read the new Creta’s complete break-up of the trim-wise features.

The Kia Seltos is no slouch in this department either. In fact, there are some features that are available on some versions of the Seltos that will not be offered on the Creta at all – such as the head-up display, front parking sensors, a 360-degree camera and blind-spot monitor.

On the other hand, the Hyundai Creta’s features list includes kit not seen on the Kia Seltos.  Aside from the 7.0-inch digital instrument cluster already mentioned, the Creta will see key inclusions like a panoramic sunroof – a hit feature in India – and is also set to become the most affordable car with an electronic parking brake.

Paddleshifters for the Creta automatics will also be a feature of interest for keen drivers. Both SUVs get eSIM-based connected-car tech but the Creta’s Advance BlueLink 1.5 system adds in a few more frills, like voice-activated controls for the sunroof and remote starting for the manual gearbox versions too.

The Seltos and Creta share their engines and gearboxes, though Hyundai doesn’t offer a manual transmission with the sporty 1.4 turbo-petrol as offered on the Kia. The 1.5 petrol, however, is offered with manual and CVT options, while the 1.5 diesel gets manual and torque converter auto options as on the Seltos.

While there’s no difference in power or torque figures, the Hyundai Creta does have the edge in fuel economy, going by the official ARAI-certified numbers. The differences are small but would be something your friendly Hyundai salesperson will highlight at the dealership.

What we can’t wait to see is if the two SUVs also drive in the same manner. The identical power and torque figures point to similar performance, but the proof of the pudding is in the eating, so we’ll just leave this open-ended for now. Hyundai, however, will set up the Creta’s suspension a bit softer than the Seltos’, and this could mean crucial differences in the way the cars drive. Could Hyundai have sacrificed some driving dynamism for better comfort? And would that make the Seltos the choice for enthusiast? We’ll know soon.

Here’s where things gets interesting. The Kia Seltos was launched with a killer price tag last year but prices have creeped up since then, if still not by a very large sum. Hyundai has also priced the Creta competitively, ranging from Rs 9.99 to 17.20 lakh. In fact, the difference in price between respective 1.5 petrol and diesel variants of both is only a few thousand rupees. The big difference comes with regard to the turbo-petrol engine. The Seltos turbo-petrol range, thanks to the cheaper manual box, starts at Rs 13.79 lakh, while the new Creta’s turbo-petrol range, which is DCT only, begins at Rs 16.16 lakh. A comparable DCT-equipped Seltos GTX costs Rs 16.29 lakh, so spec-to-spec prices remain close.

In terms of the diesel-automatic configuration as well, there's a large difference in the starting price of both SUVs. This is because the new Creta's diesel-AT range starts with the higher mid-spec SX trim whereas the Seltos' range starts at the low mid-spec HTK+ trim.

With identical power figures, near identical pricing and very few differences in terms of features, the Seltos and Creta are as close as they come. And just like you, we can't wait to bring them together in the real world to find out which one deserves your attention.