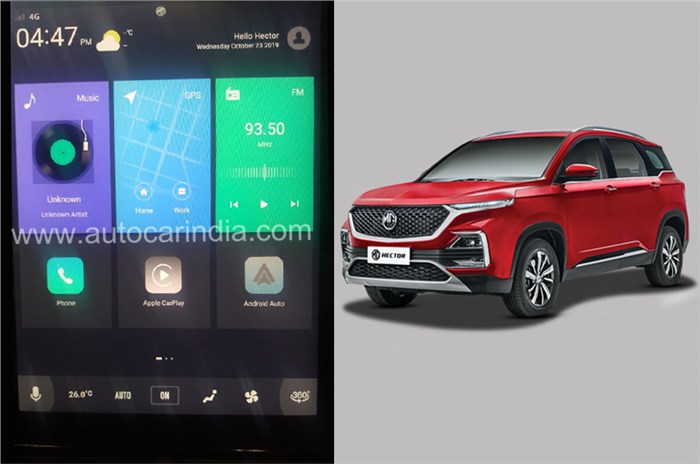 MG Motor made its entry into the Indian market earlier this year with the launch of the Hector in the highly competitive midsize SUV segment. While the Hector is among the most feature-rich vehicles in its class, with a number of segment-first offerings, the highlight of its extensive equipment list is arguably the portrait-oriented, 10.4-inch touchscreen infotainment display that dominates the dashboard in all but the base variant. MG has released a software update that introduces Apple CarPlay functionality for the infotainment system, which was only Andriod Auto-compatible at the time of launch.

Units of the Hector rolling off the production line now get the upgraded software from the word go, while existing owners can benefit from the enhanced functionality via an over-the-air (OTA) update. We can also confirm that the update also brings with it greater optimisation for the Voice Assist, along with increasing the number of voice commands already offered by the system.

The greater optimisation for the voice commands is a move from MG to address the issue of the Voice Assist - offered as part of the brand's iSmart connected car tech - having difficulty in understanding some Indian accents. The software update is expected to make the Voice Assist more compatible with a greater variety of Indian accents.

The Hector was launched in India on June 27 in four trim levels - Style, Super, Smart and Sharp. In terms of equipment, the range-topping variant is packed to the gills with kit including split LED headlamps and DRLs, cabin ambient lighting, leatherette upholstery, panoramic sunroof, power adjustable driver and co-driver seat, auto air conditioning, keyless entry/go and an electric tailgate. On all variants, safety is taken care of by dual airbags, ABS, rear sensors, traction control, ESC and hill start assist as standard, with the top-spec Sharp trim also boasts of six airbags, front parking sensors and a 360-degree camera.

The MG SUV draws its motive power from either a 1.5-litre, turbo-petrol engine or a 2.0-litre diesel motor. The petrol is available with an optional 48V mild-hybrid system that is claimed to aid fuel efficiency. Transmission duties are handled by a 6-speed manual gearbox as standard, with the non-hybrid petrol engine also getting the convenience of a dual-clutch auto transmission in the higher variants.

Owing to a bold design, spacious cabin and highly sought-after features, the Hector has been received well by the Indian masses. Production of the SUV recently crossed the 10,000-unit mark at the British automaker's Halol plant in just four months after its launch. The MG Hector competes against the likes of the Kia Seltos, Hyundai Creta and Tata Harrier in our market.