British brand has ramped up production at its plant in Halol, Gujarat to meet demand; 42,000 bookings for the MG Hector received. 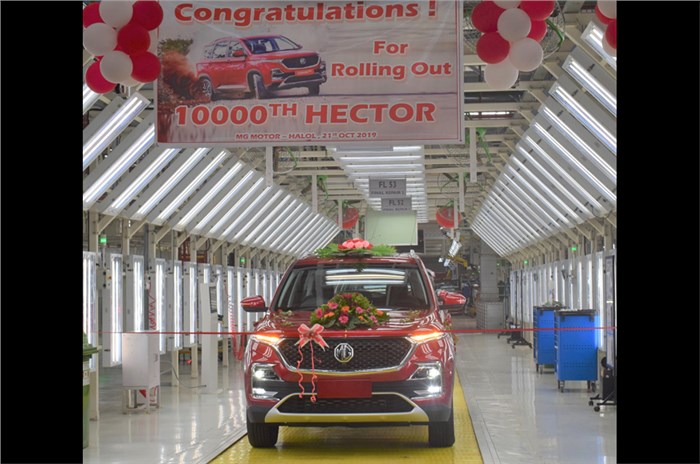 MG Motor India has announced that the 10,000th Hector has been produced at its plant in Halol, Gujarat. This news comes on the back of a recent announcement by the British brand that it will ramp up production at its manufacturing facility by hiring 500 new employees to start a second shift from November onwards.

Demand for the MG Hector has been quite high as the carmaker had to temporarily suspended accepting bookings for the SUV. By then, it had already received 28,000 bookings since its launch on June 27. On September 29, MG Motor had begun accepting bookings again and increased prices to the tune of Rs 30,000-40,000, depending on the variant. Now, four months after its launch in India, MG has received over 42,000 bookings for the Kia Seltos and Tata Harrier rival.

Now priced from Rs 12.48 lakh and going up to Rs 17.28 lakh (ex-showroom, India), the MG Hector is available with four engine-gearbox combinations – a 1.5-litre turbo-petrol with manual and DCT automatic options, a 1.5-litre turbo-petrol with mild-hybrid assist that comes with a manual gearbox, and a 2.0-litrte turbo-diesel with a manual transmission.

We like the Hector for its spacious and comfortable interiors, along with the unmatched level of kit on offer on top-spec variants. While it has its strengths, it doesn’t match rivals on a few parameters like its slightly lethargic petrol engine and the fact that it doesn’t feel as well-engineered as some of its competition.