New, developed-in-house engine produces 480Nm of torque; to be mated to an 8-speed automatic. No petrol engine on offer. 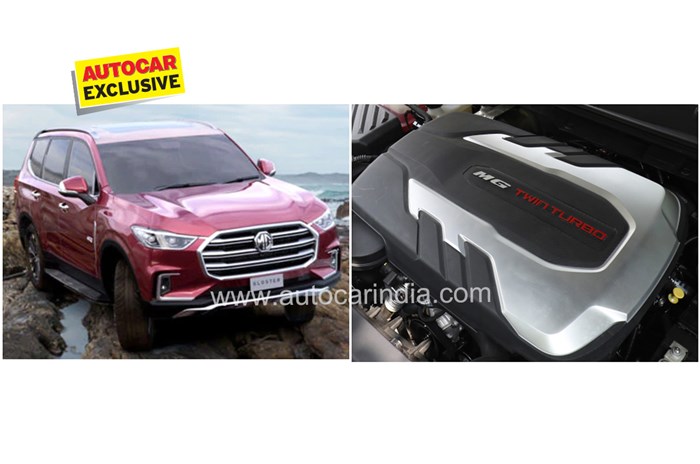 The 3-row MG Gloster will be Morris Garages India’s third – and biggest – launch of 2020 for a number of reasons. Assuming the role of the brand’s flagship model, the MG Gloster will come with on-demand 4WD, advanced driver assistance systems (ADAS), and we can now confirm it will also have a 2.0-litre, twin-turbo diesel engine.

What are the key details of the MG Gloster’s diesel engine?

As we had first reported back in 2019, under the hood of the MG Gloster is a brand-new diesel engine developed in-house by SAIC, MG’s parent company. Essentially the same unit that powers the Maxus D90 (which the Gloster is based on), the 2.0-litre, 4-cylinder twin-turbo diesel produces 218hp and 480Nm of torque, figures that are notably higher than those of other body-on-frame SUVs such as the Ford Endeavour (170hp, 420Nm), Toyota Fortuner (177hp, 450Nm) and Mahindra Alturas G4 (181hp, 420Nm). This engine is also set to be introduced on the MG Hector – possibly in a lower state of tune – in 2022.

While there is a petrol engine option available with the D90 abroad, MG has instead chosen to go with the most powerful diesel engine at its disposal. Sources tell Autocar India this engine was picked as it has the grunt to go with the Gloster’s brawny appearance as well as its premium positioning vis-à-vis other ladder-frame SUVs. The twin-turbo diesel will be the only engine option for the Gloster at launch, and will be mated to an 8-speed automatic – with paddle shifters – as standard. A terrain selection dial will also help owners choose from a handful of off-road modes when tackling different conditions and road surfaces.

What else do we know about the MG Gloster so far?

A new set of spy pictures that surfaced recently confirmed the MG Gloster’s interior remains largely identical to that of the D90. It has a ‘floating’ 12.3-inch touchscreen, a large panoramic sunroof, a yacht-style gear selector (like seen on some cars and SUVs from Audi) for the automatic transmission, an electronic parking brake and a full-digital instruments screen. A promo released recently also confirms the Gloster’s infotainment system will have a voice command function, and the SUV will also have hands-free tailgate opening, just like the 6-seat Hector Plus.

Middle-row passengers in the MG Gloster will have the luxury of captain seats and a rear AC vent with dedicated controls, while the third row will have a bench seat, making the Gloster a 7-seater.

Highlights of the MG Gloster’s ADAS package will be adaptive cruise control – a feature found only on a handful of luxury cars in India – along with autonomous emergency braking, frontal collision warning and hands-free auto-parking.

What will the MG Gloster’s price be?

With its twin-turbo diesel engine, 8-speed automatic, 4WD, ADAS and a lengthy features list, the Gloster will look to carve out a space of its own, a little above the current crop of ladder-frame SUVs. Expect MG Gloster prices to be in the range of Rs 40-45 lakh (ex-showroom) when it is launched by Diwali this year.

What do you think of MG’s decision to go with a twin-turbo diesel for the Gloster? Let us know in the comments.