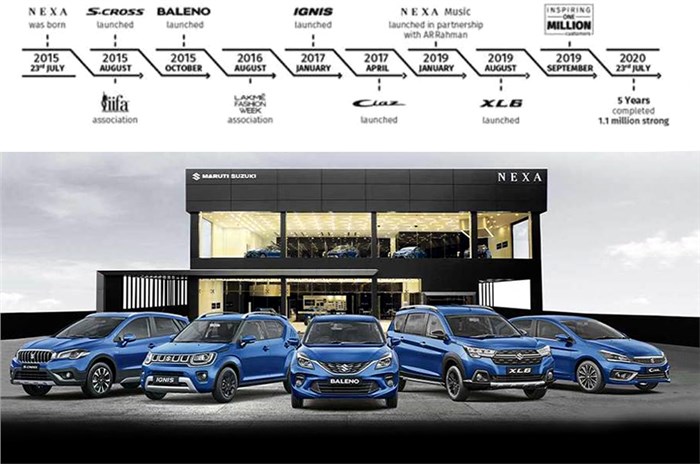 Maruti Suzuki’s Nexa sales channel recently completed five years of operation in the Indian market. What started out as a bit of a gamble to take the Japanese automaker into a more premium space has transformed into the third-largest retail network in the country, just behind the automaker’s own Arena channel and Hyundai’s network.

Instead of resting on its laurels, Maruti has trained its sights on further bolstering Nexa’s positioning in the Indian auto industry.

Maruti’s premium sales channel has expanded to over 370 showrooms across 200-plus cities since its debut back in July 2015. This is in addition to the company’s own well-entrenched Arena network of almost 2,600 outlets spread over 1,900 Indian cities. While Nexa was always positioned to offer greater exclusivity, Shashank Srivastava, executive director, sales and marketing, Maruti Suzuki India expressed that there was clearly a “scope for expansion in areas where consumers want products which are currently available only under the Nexa brand.”

The carmaker currently sells five products – Ignis, Baleno, Ciaz, XL6 and S-Cross (which will soon make a comeback in petrol form) – through Nexa dealerships that are aimed at more aspirational buyers. However, the company reports that rising income levels in Tier 3 and 4 cities present a business case strong enough for further expansion into new areas.

Moreover, Maruti will also be focusing on digital growth, especially with the COVID-19 pandemic now accelerating the adoption of contactless services. Commenting on its online initiatives, Srivastava said, “At Nexa, we are doing an experiment where we have on our digital platform an ‘e-finance market’, which is where a consumer can actually compare, while sitting at home, finance offers across different banks. That’s something which is a first in the industry, where you can even do documentation related to finance on the digital platform,” he added.

This service is being introduced as a pilot project in two cities – NCR and Pune – and will be shortly rolled out across the entire country.

The S-Cross crossover is currently the flagship Maruti Suzuki offering in the country. Responding to a question on the scope of a future Nexa product being positioned above the current flagship, Srivastava commented that with the evolving marketplace, “The SUV market is also developing. So, what Maruti Suzuki does – as do other manufacturers – is keep watching the market and see if there is an opportunity and which segments emerging,” he added. “We will keep watching the developments in all the segments and see what can be done.”

Though Srivastava refused to divulge any specifics, he did hint that the company has its eye on the SUV segments. “We must look at the long-term demand patterns for the body type, and clearly SUVs have been in demand. In fact, in 2011-12, they were just about 8 percent of the total (market sales), today they are almost close to 30 percent. So clearly, the body type seems to be moving that way,” Srivastava said.

It is likely that the 5-door Jimny – a spiritual successor to the Gypsy – that will arrive in showrooms in 2021, will be destined for the Nexa channel, as this iconic 4x4, high on aspirational value, will be a better fit in the premium sales channel and not the mainstream Arena network.

As part of its global alliance with Toyota, Maruti Suzuki is believed to be co-developing two bespoke models for the Indian market. The first is likely to be a Creta rival based on the Toyota Raize platform and this mid-size SUV is expected to see the light of day in early 2022. Also on the cards is a premium, C-segment MPV based on Toyota’s C-MPV (code: B560) that’s under development. This all-new, seven-seat MPV is likely to positioned in the wide gap between the Ertiga and Innova and will come with sliding doors.

Maruti Suzuki registered nearly 14 lakh domestic passenger vehicle sales in FY20, of which the Nexa network accounted for nearly 3 lakh units (roughly 20-22 percent). What will the next five years be like for the Nexa channel? “We have a very strong product line-up for Nexa and it will keep growing,” said Srivastava. “So I think it will be a bigger, better and more dominant Nexa. This is what I believe it will be five years down the line.”