A new spy picture gives us our clearest look yet at the Maruti S-Presso micro-SUV; likely to be launched in September 2019. 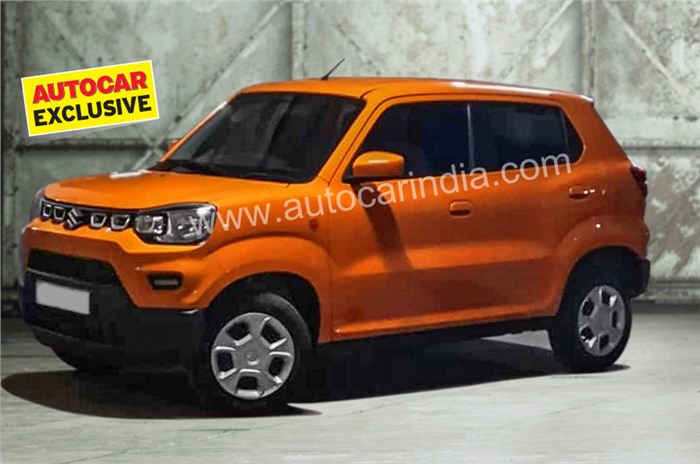 There are still a few weeks to go for its launch, but today, we bring you a picture that reveals key details of the Maruti S-Presso, the carmaker's upcoming micro-SUV. The Maruti Suzuki S-Presso has been spotted fully undisguised for the very first time ahead of its launch (set to take place on September 30, 2019) and the spy picture reveals a few design details.

Unsurprisingly, the Maruti S-Presso retains the upright shape previewed by the funky Future S concept that debuted at Auto Expo 2018, but doesn’t have a lot else in common with the concept. It has a squared-off front end with a high bonnet line, and the headlights (which appear to be halogen units) merge into the slim grille. The angular chrome elements in the grille mimic those seen on the bigger Vitara Brezza; the LED DRLs are positioned below the headlights and in keeping with the S-Presso's micro-SUV theme; and it has a black front and rear bumper to go with the body cladding along the sides.

Other notable design cues of the S-Presso include prominent front wheel arches, a blacked-out B-pillar and muscular haunches. Also visible are flap-type door handles, turn indicators mounted on the front fenders, and what appear to be full covers for steel wheels. The side profile is otherwise largely plain, but it’s clear that the S-Presso is a high-riding hatchback and its 180mm of ground clearance matches that of the Kwid.

At 3,565mm, the S-Presso is 20mm longer than the Alto K10, and has a 20mm longer wheelbase too, but falls well short of matching the Kwid’s length (3,679mm) and wheelbase (2,422mm). That said, at 1,564mm, the S-Presso is significantly taller than both, the Kwid (1,478mm) and the Alto K10 (1,475mm), which should translate into plenty of headroom for passengers. More details regarding the S-Presso's size and how big it is in comparison to the Kwid can be found here.

While there is no picture of the interior yet, we can tell you that on the inside, the Maruti S-Presso will have a dark grey interior theme and colour-coordinated elements as seen on the Future S concept. The dashboard design, too, will be similar to that of the concept, with a circular enclosure housing a digital speedometer and the touchscreen infotainment system.

In comparison to the Renault Kwid, the S-Presso is expected to get a sole engine option – a BS6-compliant version of the 1.0-litre, three-cylinder K10B petrol engine. In BS4-spec, the K10B makes 68hp and 90Nm of torque, and for the S-Presso, will be available with a 5-speed manual as well as with an AMT option. A total of four variants of the S-Presso will be on offer.

The S-Presso won’t replace any model in Maruti Suzuki's line-up, and will be sold alongside the brand’s bread-and-butter models at its Arena dealerships. Expect the Maruti Suzuki S-Presso to be priced at around the Rs 5 lakh mark.

What do you think of the Maruti S-Presso's design? Let us know in the comments.