Maruti Suzuki's upcoming SUV-inspired small car, the S-Presso, has a high, SUV-like stance but is a touch smaller than the Kwid. 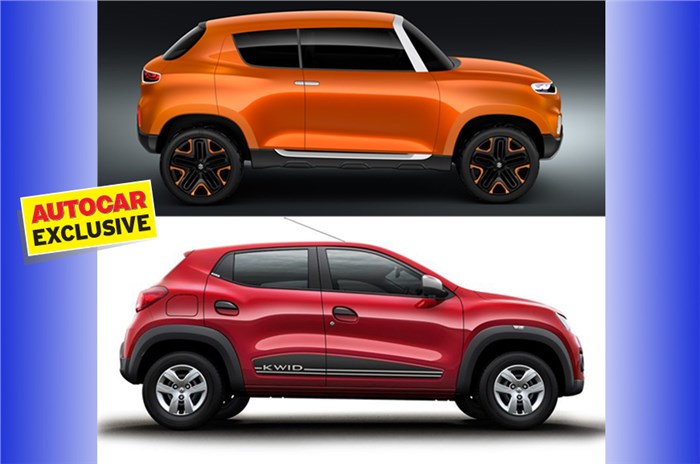 We’re now less than a month away from the Maruti Suzuki S-Presso’s launch, which is scheduled for September 30, 2019. The S-Presso is designed to be an entry-level car with the flavour of an SUV, and is a natural rival to the Renault Kwid. Now, we bring you the S-Presso's dimensions, which help give some perspective on how it will match up with the Kwid, in terms of size.

At 3,565mm, the Maruti Suzuki S-Presso is 20mm longer than the Alto K10, but is a significant 114mm shorter than the Renault Kwid. This considerable difference in length also means the S-Presso has a wheelbase that’s 42mm shorter than that of the Kwid. Measuring 1,520mm in width, it is 59mm narrower than the Renault (1,579mm) as well. However, the S-Presso stands tall in the height department; at 1,564mm, it is a full 86mm taller than the Kwid, and the benefit in height should free up plenty of headroom on the inside.

The Maruti Suzuki S-Presso's ground clearance is rated at 180mm, which is the same as that of the Kwid. Also nearly identical is the S-Presso's fuel tank size of 27 litres, compared to the Kwid's 28-litre tank. Another key detail is that higher-spec S-Presso variants will ride on 14-inch wheels wrapped in 165/70-section tyres, as opposed to the Kwid, which gets smaller 13-inch wheels with 155/80-section tyres.

In comparison to the Kwid, the S-Presso will get a sole engine option – a BS6-compliant version of the 1.0-litre, three-cylinder K10B petrol motor. The engine, in BS4-spec, makes 68hp and 90Nm of torque, and for the S Presso, will be available with a 5-speed manual as well as with an AMT option. A total of four variants of the S-Presso will be on offer.

The Maruti Suzuki S-Presso's price is expected to be in the range of Rs 3.5-4.7 lakh, and the model will be sold alongside Maruti's existing small car line-up at its Arena dealerships.