Ahead of its launch on September 30, 2019, we bring you all the features that'll be available on each variant of the Maruti Suzuki S-Presso. 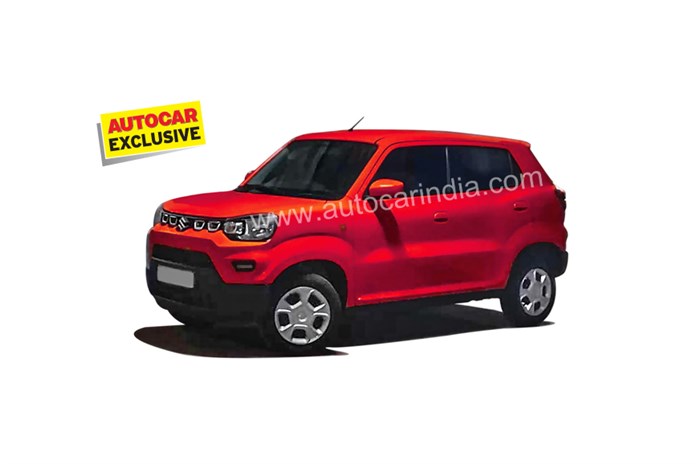 We’ve brought you exclusive details and revealed the very first picture of the production-spec Maruti Suzuki S-Presso. Now, we can provide even more details on the variants that Maruti Suzuki's SUV-inspired hatch will be available in, along with information about what safety kit and features are on offer with each trim level.

The Maruti S-Presso will be available in a total of four variants – Std, LXi, VXi and the range-topping VXi+. ABS, a driver-side airbag, rear parking sensors, seat belt reminders, a digital speedometer and a speed alert system will be standard across the range, but apart from that, the entry-level S-Presso Std variant will be fairly bare bones. It does get an options pack that adds a passenger side airbag.

The LXi variant will add an air conditioner and power steering, but it’s the S-Presso VXi that’ll get essentials such as keyless entry with central locking, Maruti’s SmartPlay Dock audio system with Bluetooth connectivity, front power windows, body coloured bumpers and wheel covers. These two variants are also available in LXi(O) and VXi(O) form, which adds a passenger side airbag.

A front passenger airbag will be standard on the top-spec VXi+ (and optional on all other variants), along with the 7.0-inch SmartPlay Studio infotainment system with voice recognition, steering-mounted controls, rear parcel tray, body-coloured ORVMs and door handles, and a 12V-volt accessory socket. There will be no alloy wheels on any variant, a decision taken to keep prices low.

On the whole, the S-Presso will match the Renault Kwid in terms of features, but the Kwid also gets a reverse camera and alloy wheels (on the Climber version), which are unlikely to be offered on the S-Presso.

We had confirmed earlier that the S-Presso will be the first recipient of Maruti’s upgraded, BS6-compliant 1.0-litre K10B petrol engine. The three-cylinder engine – which continues to produce 68hp and 90Nm of torque, and will be the sole option for the S-Presso – is expected to subsequently be introduced on other models, such as the Celerio and Wagon R. As has been the case with other BS6-compliant engines, there could be a notable drop in the K10B’s fuel efficiency, which, in BS4-spec, is rated at 23.95kpl. In addition to a 5-speed manual gearbox, Maruti Suzuki will also offer an automated manual transmission (AMT) option on the top three variants (VXi, VXi(O)and VXi+).

To give you a quick recap, the S-Presso is shorter in length and narrower than its chief rival, the Kwid, but is significantly taller. It's set to go on sale on September 30, and the Maruti S-Presso's prices are expected to range from Rs 3.3-4.5 lakh (ex-showroom).

Which other features would you have liked to see on the Maruti S-Presso? Let us know in the comments.