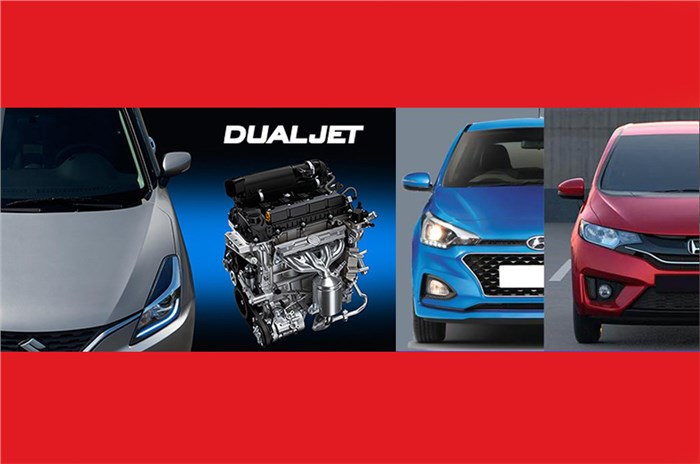 Maruti Suzuki has introduced mild-hybrid technology to the premium hatchback segment in India, with the launch of the Baleno 1.2 DualJet Smart Hybrid, priced from Rs 7.25-7.86 lakh (ex-showroom, Delhi).

Thanks to this launch, Maruti has claimed another segment-first – the Baleno is the first premium hatchback to get a BS-VI-compliant engine. Compared to the standard Baleno – the prices for which have also increased slightly thanks to the K12B engine having been upgraded to meet the stricter emission norms – the new petrol-hybrid setup has increased prices over their respective mid-spec variants by about Rs 89,000.

Is the premium for the more powerful and efficient Baleno worth it? We compare the new Baleno DualJet to the standard Baleno and its petrol-powered premium hatchback rivals on paper, to find out.

Of all the naturally aspirated, four-cylinder engines here, the new Baleno DualJet and Honda Jazz lead the pack in terms of outright power figures. However, it is the standard K12B Baleno and Hyundai i20 that make the most torque, albeit by a small 2Nm margin. The new engine combined with Maruti Suzuki's Smart Hybrid system help the Baleno DualJet post the best mileage per litre figure (at 23.87kpl), followed by the standard Maruti Baleno (21.01kpl). The i20 and Jazz are comparatively far less fuel efficient, at 18.24kpl and 18.2kpl, respectively.

An interesting point to note here is that the new 1.2-litre engine on the Baleno is only available with a 5-speed manual as standard while the Baleno K12B, i20 and Jazz all get CVT automatic gearbox options.

Due to the shift to a BS-VI-compliant engine, prices of the base Hyundai i20 now undercut those of the Maruti Suzuki Baleno by a Rs 7,000 margin, although the top-spec Baleno with the K12B engine is still more affordable than the Hyundai. Honda Jazz prices are closer to the Baleno DualJet Smart Hybrid’s price tag of Rs 7.25-7.86 lakh.

As we had reported upon launch, the new Maruti Suzuki Baleno Smart Hybrid is available in the mid-spec Delta and Zeta variants, which means they are decently kitted. The price difference between the standard and hybrid Baleno seems to be justified thanks to the more sophisticated K12C engine and mild-hybrid technology; the Baleno DualJet Smart Hybrid also isn’t priced too far away from equivalent Hyundai i20 and Honda Jazz variants.

Despite a price increase of about Rs 11,000-19,000, the prices of the standard Baleno's automatic variants still undercut those of its rivals by quite a significant margin.

Based on its price and its greener credentials, the Maruti Suzuki Baleno – with the BS-VI-compliant K12B motor – is still an excellent value-for-money buy and should continue to rule the premium hatchback segment in terms of sales. The new Baleno DualJet Smart Hybrid will definitely add to Maruti’s sales figures as well, with its main draw being better mileage per litre and a (fingers crossed) better driving experience. A proper comparison, along with Autocar India’s rigorous road test, will be required before we come to a definitive conclusion, but on paper, both the BS-VI-compliant Balenos make for a very good deal.

For now, the Baleno range will retail with four engine options – the two BS-VI-compliant, 1.2-litre petrol engines, the 102hp, 1.0-litre Boosterjet turbo-petrol mill (in the Baleno RS) and the FCA-sourced 75hp, 1.3-litre diesel motor. Interestingly, the price difference between the new DualJet petrol Baleno and diesel Baleno ranges between Rs 7,000 for the Baleno Delta and Rs 14,000 for the Baleno Zeta. In addition, the difference in mileage-per-litre figures is a respectable 3.52kpl, with the Baleno diesel posting a higher 27.39kpl figure.

Would you spend the additional Rs 89,000 over the standard Baleno for the Maruti Baleno DualJet Smart Hybrid? Or would you continue to buy the diesel Baleno? Let us know in the comments below.