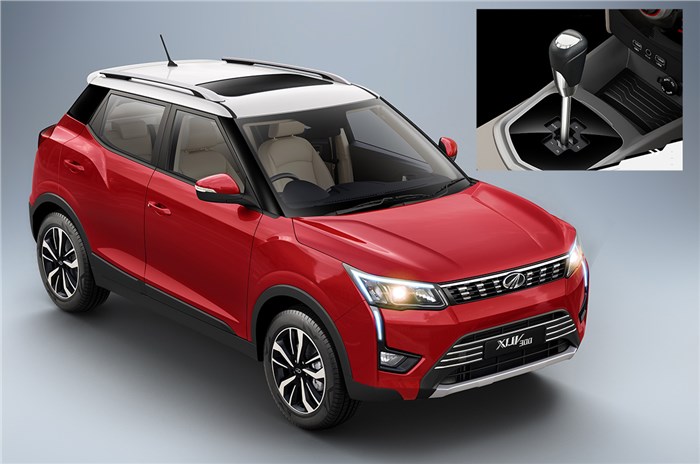 The Mahindra XUV300 is now available with an AMT gearbox option for the 1.2-litre turbo-petrol engine, with prices starting from Rs 9.95 lakh (ex-showroom, Mumbai) – about Rs 55,000 more than the manual model. Bookings for the XUV300 Autoshift petrol-AMT are now open, with deliveries slated to start later in the month

As with the diesel AMTs, the W6 AMT variant additionally comes with ESC and hill-start assist, features that are not available on its manual counterpart. The 6-speed gearbox also comes equipped with a creep function, which, interestingly, is automatically disabled should one of the SUV’s doors open.

The W8(O) Autoshift gets all the bells and whistles including auto headlamps, dual-zone climate control, keyless entry and go, a 7.0-inch touchscreen with Android Auto  and Apple CarPlay, satellite navigation, 7 airbags, ESC, hill-start assist, a rear view camera and front parking sensors, to name a few. A new addition, though, to the W8(O) AMT – petrol and diesel – is Mahindra’s BlueSense Plus connected car technology with over 40 connected car features.

Under remote vehicle operations, owners can lock/unlock the cars via their smartphone, switch on the air-con, activate the hazard lights and more. The location-based functions include live vehicle tracking, location sharing and sending the owner alerts in case the car deviates from a set route.

Safety and security functions include alerts in case the vehicle is being stolen, geo-fencing and time fencing-based alerts, low tyre pressure, overspeeding and not wearing a seat belt. Additionally buyers can also get details such as fuel levels, tyre pressure, odometer reading and more, on their phones.

Another important update is the introduction of a sunroof on the lower variants. Previously only available on the fully-loaded W8(O), it is now available on the mid-spec W6 and W8 variants – manual and AMT – as well. However, the new addition does increase prices, with the W6 variant now priced from Rs 9.4 lakh (ex-showroom, Mumbai) – about Rs 27,000 more.

Coming to the rivals, the XUV300 rivals the Kia Sonet, Nissan Magnite, Toyota Urban Cruiser, Maruti Vitara Brezza, Ford EcoSport, Hyundai Venue, Tata Nexon and the upcoming Renault Kiger. Prices for the XUV300 petrol AMT start above the entry-level automatic variants of the Magnite, Venue, Nexon, Vitara Brezza and Urban Cruiser, with only the EcoSport and Sonet having a higher starting price. The EcoSport has the highest starting price for a petrol-auto given that it’s only available in one fully-loaded variant.

Mahindra Roxor sales to re-commence in the US