Owing to ever-increasing input costs, Mahindra has introduced its third price hike across its model line-up this year, effective from July 2021. 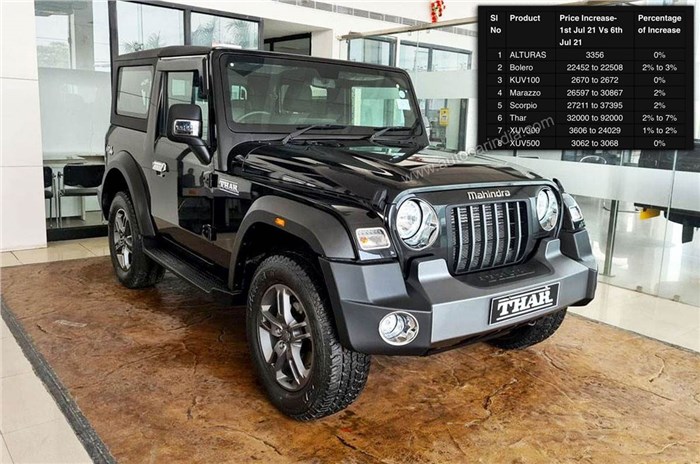 Mahindra has rolled out a price hike across its entire model lineup, effective from July 2021. This is third price hike introduced by the homegrown carmaker this year, with the first having come in February with the second following just a couple of months ago, in May. The reason for the price hike has been attributed to ever-increasing input costs, according to a few dealers we spoke to.

Mahindra Thar: most affected by the price hike

Prices for the Mahindra Thar have gone up by around Rs 32,000-Rs 92,000, depending on the variant. This translates to about 2-7 percent hike in price, the highest for any model with this round of price hike.

The Thar has grown to be an immensely popular product for Mahindra, with the carmaker having received more than 50,000 bookings and waiting periods stretching up to several months for certain variants. While Mahindra has been trying to increase production, supply constraints have bound them to their current pace of production.

Other Mahindra models models see a reasonable hike in price

Other popular models from Mahindra’s stable – the Bolero, Marazzo, Scorpio and the XUV300 – see a more reasonable hike in price, of around 2 percent. For instance, prices for the Mahindra Bolero have gone up by Rs 22,452-Rs 22,508, translating to about a 2-3 percent premium.

Here’s a summary of the price hike for each of the models, as per our dealer sources. Mahindra is yet to reveal the exact variant-wise price breakup, but this is how big the gaps will be..

Mahindra will introduce the new Bolero Neo, which is essentially a heavily update TUV300, on July 15 in India. Additionally, the all-new XUV700, the brand's most important launch in India this year, will see a price announcement in the coming months.