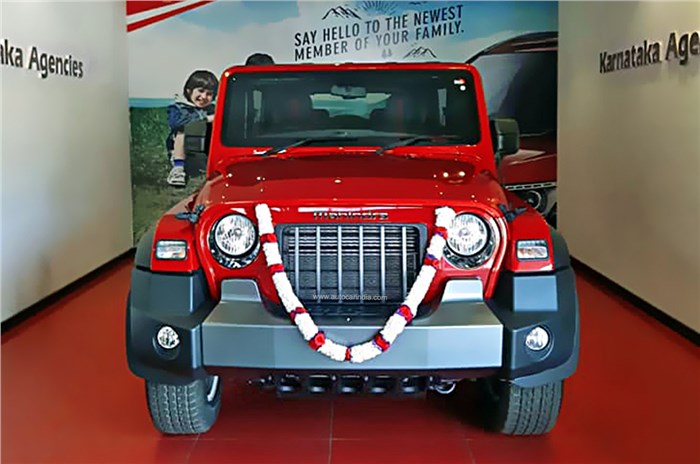 The second-generation Mahindra Thar, has received over 6,500 bookings in the month of December 2020, the carmaker revealed in a virtual press conference held on January 1, 2021. The SUV, introduced by Mahindra & Mahindra (M&M) on October 2, has been making waves in the market and is showing no signs of slowing down.

“The demand for all our brands is much higher than we had expected at this point in time, and we have ramped up production at all our suppliers,” he added.

The new Thar had already breached the 20,000-units bookings milestone within a month of its launch and pushed M&M to ramp up production by 50 percent. The carmaker also put a hold on bookings for the entry-level AX variants shortly after in November along with delisting the variant. Come December the option for the side-facing seats also dropped following the announcement of the Thar’s Global NCAP crash test results. The Thar is currently available in two variants – AX Option and fully-loaded LX.

In its latest iteration, the Mahindra Thar has also been launched in both diesel and petrol automatic variants, alongside the conventional manual trims. The 2.2-litre diesel develops 132hp and 300Nm, while the 2.0-litre turbocharged petrol belts out 152hp and 300Nm (320Nm with an automatic gearbox).

According to the company, almost half of the sales are being driven by the six-speed torque convertor automatic options. “About 50 percent of the Thar’s sales are coming from the automatic options, which clearly reflect the acceptance of upmarket mainstream Mahindra products,” Jejurikar added.

However, while the demand is strong, there are possible constraints on the supply side, attributed to the seamless availability of raw materials, especially semiconductors.

“Anything around semiconductors is the primary supply chain constraint at the moment.”Answering a query whether the semiconductor import constraints at Bosch are going to hamper its production, Jejuriker said, “While we will continue to have uncertainties with Bosch over the next few months, we would build a buffer and not let it affect our production.”

Mahindra also recently announced that it and Ford had called off the joint venture between the two brands, the agreement for which was signed back in 2019. However, the two brands are set to continue to jointly produce the second-gen Mahindra XUV500-based Ford C SUV. Mahindra will also still supply its 1.2-litre TGDI turbo-petrol engine to Ford for use in the EcoSport.