The Hyundai Venue comes with keen pricing and a competitive specification set. Question is, how does it compare with rivals? 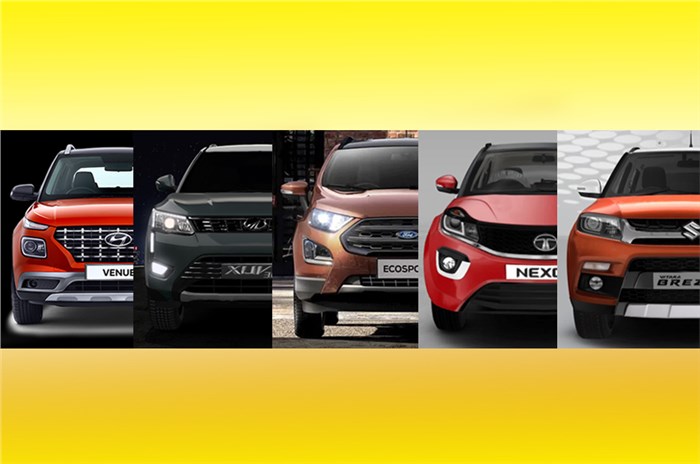 The Hyundai Venue is finally on sale marking the Korean carmaker’s long awaited entry into the compact SUV segment. Venue prices range from Rs 6.50-11.1 lakh (ex-showroom) putting the SUV in the heart of the hotly contested segment amidst rivals like the Maruti Suzuki Vitara Brezza, Mahindra XUV300, Tata Nexon and Ford EcoSport. We’ve pit the five SUVs against one another, comparing them on technical specifications and price to see where exactly the Hyundai sits.

The Hyundai Venue appears slightly smaller than its rivals and the 57mm height difference to the EcoSport is particularly telling. However, the EcoSport is 2mm narrower than the Venue, while the Nexon’s wheelbase is 2mm shorter than the Hyundai’s. Expect the Hyundai to offer comparatively less leg room, shoulder room and headroom than the XUV300, which is the widest and has the longest wheelbase as well. The Maruti Vitara Brezza sits above the Venue in size, especially in with regards to its overall height, but is smaller than the others.

Coming to the SUV’s wheels, the EcoSport and XUV have 17-inch alloys on top-spec variants while the Venue, Brezza and Nexon make do with 16-inchers. In terms of ground clearance, the Nexon leads the standings with its 209mm figure. The Venue's 190mm ground clearance merely betters that of the Mahindra XUV300, which is the lowest among compact SUVs. Talking practicality, the Venue’s 350-litre boot is on the larger side; it equals the Nexon's capacity and is just 2 litres less than the EcoSport's luggage bay.

Like the Ford EcoSport, the Hyundai Venue comes with three engine options – a naturally-aspirated petrol, a turbo-petrol and a turbo-diesel. The Tata Nexon and Mahindra XUV300 are available with turbo-petrol and turbo-diesel engines while the Maruti Vitara Brezza has just one diesel engine option. Do note, Maruti Suzuki will brings its 1.5-litre K15B petrol engine to the compact SUV’s line-up soon.

Venue’s with the 1.2-litre petrol engine are the most affordable in the range but the compromise is that the engine is down on power to rivals. On the other hand, the 1.0 GDI turbo-petrol engine’s 120hp figure is just 5hp short of the EcoSport 1.0’s segment-leading 125hp power figure. The Mahindra XUV300 petrol engine’s 200Nm rating makes it the torqueist of the lot.

The Venue, EcoSport and Nexon all get an automatic option with one of their petrol engines – the Hyundai gets a sophisticated 7-speed dual-clutch unit with the 1.0-litre turbo-petrol, the Ford has a 6-speed torque convertor on the 1.5 petrol, while the Tata gets a cost-effective 6-speed automated manual transmission.

When it comes to the compact SUV’s diesel engines, the Mahindra XUV300 is the most powerful by a significant margin, while the Maruti Suzuki Vitara Brezza’s soon-to-be-phased out 1.3-litre engine has the lowest output figures. The Hyundai Venue diesel has the same 90hp rating as the Maruti but the engine churns out more torque, 20Nm more to be precise. The Tata Nexon diesel has the second-highest power and torque figures, while Ford’s 1.5 diesel is a distant third. A point to note here is that Maruti’s new 1.5-litre DDiS 225 diesel motor will soon be introduced on the Brezza, which will see outputs increase to 95hp and 225Nm of torque. The Brezza’s new diesel engine would, in effect, relegate the Venue diesel to the least powerful slot.

The diesel versions of all these SUVs are available with a manual gearbox though only the Vitara Brezza and Nexon offer the convenience of an automatic transmission with their AMT gearboxes. However, Mahindra is working on a diesel-AMT for the XUV300, which should arrive in the coming months.

Based on its base price, the Hyundai Venue will be a viable alternative to the more affordable Tata Nexon (cheapest in the segment) and Maruti Suzuki Vitara Brezza, while the top-spec versions should be able to attract buyers of the Ford EcoSport and Mahindra XUV300 (the most expensive model here). Our on paper comparison shows that Hyundai has brought out an SUV that can go toe-to-toe with its rivals, though how it will perform on the road is another matter altogether. Stay tuned for our review, comprehensive road test and a full comparison of the Hyundai Venue.