The Hyundai Kona Electric might be India’s only long-range EV for now, but it will soon find rivals in the MG eZS and Nissan Leaf. So how does it fare against the upcoming competition? 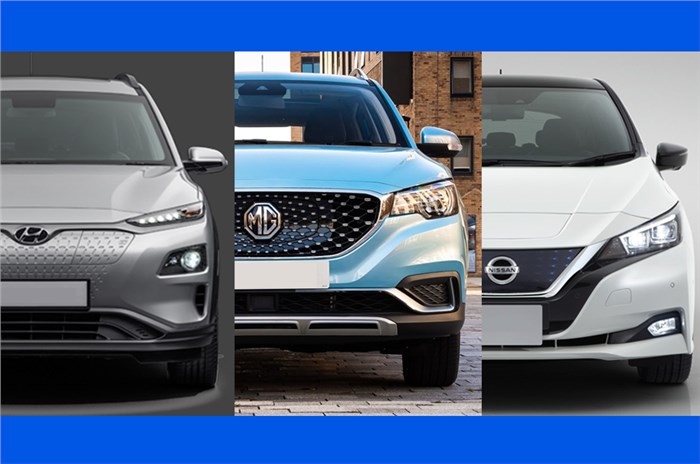 Electric vehicles have long been touted as the next big leap in the evolution of the automobile, but the fact is that India has been behind the curve both in their adoption and development of the infrastructure to support them. While infrastructural challenges remain, India is finally getting models that could be seen as realistic alternatives to conventional combustion engine models. The Hyundai Kona Electric has just gone on sale, while the MG eZS and Nissan Leaf – the world’s bestselling EV – are expected to go on sale by the end of the year.

So, how do the eZS and Leaf stack up against the India-spec Kona on paper? Read on to find out.

Though Hyundai markets the Kona as ‘India's first electric SUV’, the EV is more high-riding crossover than burly SUV. On the other hand, the MG eZS, with its more upright stance, fits the bill as an SUV more convincingly. Make what you want of its design but it's the Leaf hatchback that’s the longest model here and the one with the longest wheelbase too. The MG eZS is marginally wider than the other two, but it is the tallest – a nice advantage to have in a country that favours high-riding vehicles.

All three models position their battery packs under the floor. However, the battery packs do weigh all the cars down. The Kona Electric is the lightest car here, if only just.

All the EVs here make use of synchronous motors and single-speed automatic transmissions to power their front wheels. With 150hp on tap, the Leaf is the most powerful electric in the category, as well as the fastest. There is a more potent iteration of the Nissan available abroad, but that is unlikely to make it to India. The Hyundai manages to hold its own too with the most torque (395Nm).

Despite being on the back foot with the smallest (39.2kWh) battery pack, the Kona Electric surprisingly manages to eke out a considerable 289km range (maximum among the three competitors) on the international WLTP driving cycle. The more lenient Indian test cycle, however, sees the same figure jump to a whopping 452km. The eZS and Leaf aren't that bad on range either, with WLTP figures of 262km and 270km, respectively.

Moving on to charging capabilities, the Hyundai and the MG manage to score a point each with the shortest AC and DC charging times, respectively.

In an attempt to keep costs in check, Hyundai has chosen to bring in the Kona Electric via the CKD route, with a few components being sourced locally. Furthermore, a recent reduction in GST rates from 12 to 5 percent has helped the Korean automaker slash prices by another Rs 1.59 lakh. However, at Rs 23.71 lakh (ex-showroom, pan-India), the EV is still priced at a considerable premium over similar-sized, conventionally powered SUVs.

MG has announced that it will be adopting a strategy comparable to that of the Korean automaker which, according to estimates, should allow it to position the eZS in a similar price bracket. The Nissan Leaf, on the other hand, is expected to be a full import and, as a result, could carry a hefty sticker price upwards of Rs 35 lakh (estimated, ex-showroom) owing to India’s punitive duty structure.

With the possibility of a high price and an inadequate fast charging infrastructure playing spoilsport for early adopters, it remains to be seen if the EVs can live up to their full potential.