Curious to know about the Kona Electric’s specifications, charging times, features and more? We have you covered. 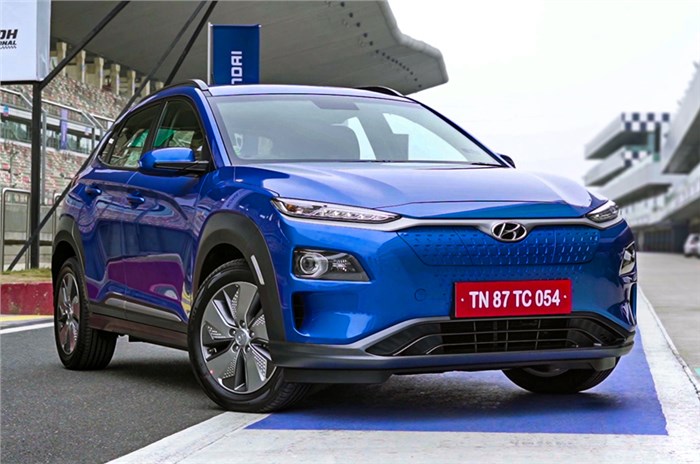 Buying an electric car in India has always been accompanied by compromises. Lacklustre performance and poor range, aside from inadequate charging infrastructure, have meant the few EVs on sale have never been seen as alternatives to conventional cars. And that’s why the arrival of the Hyundai Kona Electric is a bit of a big deal. Here’s an EV that’s peppy, can go long distances between full charges and is even future-ready with respect to charging capabilities. We’ve listed the five most interesting aspects of Hyundai’s first EV in India.

The Kona EV for India comes with a 39.2kWh battery (a longer-range 64kWh battery pack is available abroad), which has an ARAI-certified range of 452km on a single charge. Expect real-world range to be around 300km, which is still a very respectable figure as far as EVs go. If the Kona Electric is anything to go by, range anxiety that EVs are notorious for could be a thing of the past.

The 39.2kWh battery pack runs a motor that sends 136hp to the front wheels via a single-speed automatic gearbox. While the power figure may not be particularly exhilarating (the Hyundai Creta’s 1.6-litre diesel motor makes 128hp and 260Nm of torque), it is important to remember that the whopping 395Nm of torque that the electric motor produces is available from the get go. Hyundai claims a 0-100kph time of 9.7sec.

Also interesting is how the Kona Electric drops speed. There are three levels of regenerative braking, toggled via traditional paddleshifters, and you can even use the regen paddles to brake and bring the car to a standstill, albeit in smooth traffic.

The Hyundai Kona Electric comes with a 2.8kW portable AC charger that can plug in to any 15amp wall socket and can juice up the battery pack to full in 19 hours; 3 hours of charge is good enough for 50km. Hyundai India also provides a 7.2kW wall-box AC charger that brings charging time down to 6 hours 10 minutes. You can even have an additional wall charger set up at a second location for an additional Rs 80,000. DC fast-charging speeds things up further. With a 50kW DC fast charger, the battery can go from 0-80 percent charge in all of 57 minutes. Sadly, you’ll have to hunt for a DC fast charger of the right spec – only select Indian Oil outlets in four major metropolitan cities and 15 Hyundai dealers in 11 cities will have this facility.

Hyundai might market the Kona Electric as India’s first electric SUV but buyers expecting to see an oversized and beefy vehicle will be disappointed. The Kona Electric sits quite low and the stance is more raised hatchback than SUV. Still, it looks unique and elements like the faux grille that actually hides the charging ports add distinction to the Kona Electric. The Kona Electric’s slim headlights are new-age fair and Hyundai has also used plastic cladding to good effect.

On the inside, the Kona Electric isn’t what you’d call revolutionary but it is well turned out. The dash is neatly laid out, the touchscreen and digital dials give you all the info you need and plastic quality is premium enough, even though there are a few hard plastics inside. There is space for five but the high floor means the seating position at the rear isn’t the comfiest. Again, you’ll have to take the ‘SUV’ marketing spiel with a pinch of salt; the view out is more tall boy hatch than SUV.

Battery electric vehicles tend to be expensive and that holds true for the Kona Electric as well, despite the fact that it’s assembled in India. The Kona Electric has been priced at Rs 25.30 lakh (ex-showroom, India), which is quite a lot of money for a car of its size. However, consider the Kona Electric’s specs and future-proof tech and it’s fair to see it as a rival to like-priced luxury hatchbacks. It is the priciest EV in India for the moment, though larger, more powerful EVs will take the tag in the months to come.

In what could be a further incentive to buy the Kona Electric is the government’s recent proposal to reduce GST on EVs, which could bring down the electric SUV’s price by about Rs 1.4 lakh.

Potential buyers will also be happy to know that maintenance costs are said to be one-fifth of the Hyundai Creta petrol’s and annual service costs are claimed to be a bit more than Rs 7,000. Still, only a long-term test will reveal how much it costs to run. Hyundai does offer a 3-year/unlimited kilometre warranty pack with the EV, along with an 8-year/1,60,000km warranty on the battery pack.