The Hyundai Creta iMT will only be available on the S variant; new S+ and SX(O) Knight Edition to join the line-up. 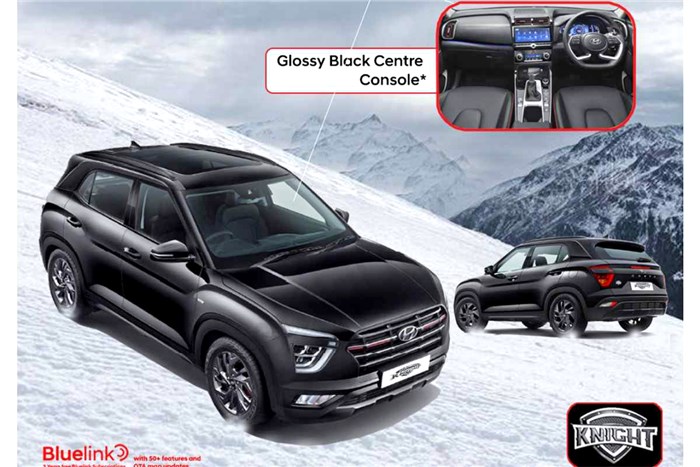 Hyundai will soon introduce a fifth gearbox option for its popular Creta line-up. The Creta will come with a 6-speed iMT gearbox, similar to the Venue and i20, and prices are expected to be announced soon, according to dealer sources.

Additionally, a rejig in the variant line-up is expected. Hyundai has also introduced a new Knight Edition of the Creta, which comes with blacked-out exterior and interior embellishments.

Hyundai has introduced the 6-speed iMT clutchless manual gearbox with the 115hp, 1.5-litre petrol engine on the Creta. This petrol engine is now available with three gearbox options – a 6-speed manual, iMT and a CVT automatic. The iMT gearbox will only be available on the mid-spec Creta S and prices are expected to be announced soon.

There’s a variant reshuffle to the rest of the Creta line-up as well. The 140hp, 1.4-litre turbo-petrol engine will now be available on a new S+ variant. So far, this engine-gearbox was only available on the higher-spec SX and SX(O) variants. Hyundai has also discontinued the 1.4 turbo DCT SX and the 1.5 diesel AT SX variants.

Cashing in on the trend of Tata's Dark Edition variants, the Creta Knight Edition gets an all-black theme for the exterior and interior. Compared to the regular models, the Knight Edition variants get a new gloss black finish for the grille with red inserts, blacked-out front and rear skid plates and red front brake callipers.

The wing mirrors, roof rails, side sills and C pillar garnish also get the blacked-out treatment. Even the Hyundai logo on the front and rear get a dark chrome finish. The wheels, meanwhile, have been finished in a new gun metal shade, with a Knight Edition emblem on the tail gate.

On the inside, the all-black theme continues for the seat upholstery and the dashboard, and for some contrast, the AC vents are finished in red. There’s red contrast stitching for the seats as well.

The Creta Knight Edition is available on the newly introduced S+ and top-spec SX(O) automatic variants. It can be had with either the 1.5-litre petrol or diesel engines, but not with the 1.4-litre turbo-petrol engine.

Thanks to the ongoing chip-shortage, waiting periods for the Creta at most locations is upwards of six months, depending on the variant. Hyundai has already unveiled a major update to the Creta in Indonesia, and the refreshed SUV could make it to our shores by the end of this year at the earliest.

Would you like to see more Dark Edition models from Hyundai? Let us know in the comments below.

becuase of the waiting time, I cancelled my plans to purchase car by 2 years ! Booo why launch a car when you can't supply ?

becuase of the waiting time, I cancelled my plans to purchase car by 2 years ! Booo why launch a car when you can't supply ?