Hyundai India has decided to delay the launch of the Alcazar due to the surge in COVID-19 cases. 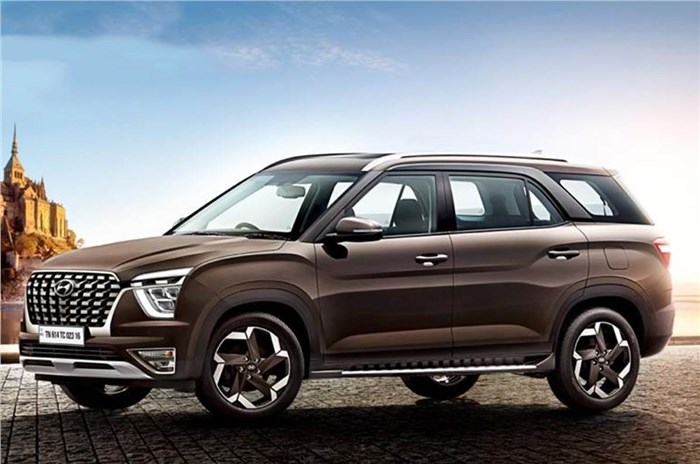 The launch of the Hyundai Alcazar SUV has been postponed. Prices for the three-row Hyundai SUV will now be announced by late May 2021. The SUV was originally slated to be launched on April 29, 2021. This move has been made in light of the recent surge in COVID-19 cases across India.

In essence, the new Alcazar is a six/ seven seat derivative of the Creta mid-size SUV, as both models share the same platform. However, the Alcazar has been updated to sport a longer wheelbase – 2,760mm (150mm more than the Creta) in order to accommodate the extra row of seats.

The production-spec Alcazar has already been revealed by Hyundai in early April. The new three-row SUV shares a number of key design elements with the Creta, along with some body panels. Though, Hyundai has also made various styling changes to help distinguish the Alcazar from the Creta. These include a tweaked grille, an updated front bumper, a prominent rear quarter glass, new wraparound taillights,a slightly more upright tailgate, faux dual exhaust tips and a larger set of 18-inch alloy wheels (compared to the Creta’s 17-inchers).

In terms of features, the Alcazar is expected to get all the features available on the Creta, such as the 10.25-inch touchscreen infotainment system with Android Auto and Apple CarPlay, Hyundai’s connected car tech, a 360-degree camera, a panoramic sunroof, ISOFIX seats mounts, wireless phone charging, automatic climate control and much more.

Additionally, as we have already mentioned, the Alcazar will get an added row of seats, with either a 6-seat (with captain’s seats in the second row) or 7-seat (with bench seating in the second row) configuration. The interior will also be offered in a dual-tone colour scheme and the captain's seats version gets a unique floor-mounted central armrest with cupholders and extra storage space.

Powering the Alcazar will be either a petrol or a diesel engine. The petrol engine is an updated and more powerful version of the Elantra and Tucson’s 2.0-litre, four-cylinder unit making 159hp and 192Nm. The diesel engine will be the same 1.5-litre, four-cylinder turbocharged unit from the Creta that produces 115hp and 250Nm, though it has been tuned differently. Both engines will come with either a 6-speed manual or a 6-speed automatic gearbox. You can read our review of the Hyundai Alcazar prototype to see what it is like to drive.

In India, the Hyundai Alcazar will compete with the likes of the MG Hector Plus, Tata Safari and the Mahindra XUV500. The segment is set to get more competitive later this year, once the new Mahindra XUV700 is launched in our market.

Hyundai is not the only carmaker that has decided to push back its launch, as the Skoda Octavia launch has also been postponed due to the prevailing COVID-19 situation.