A few standard features will be done away with in the fifth-gen Honda City. 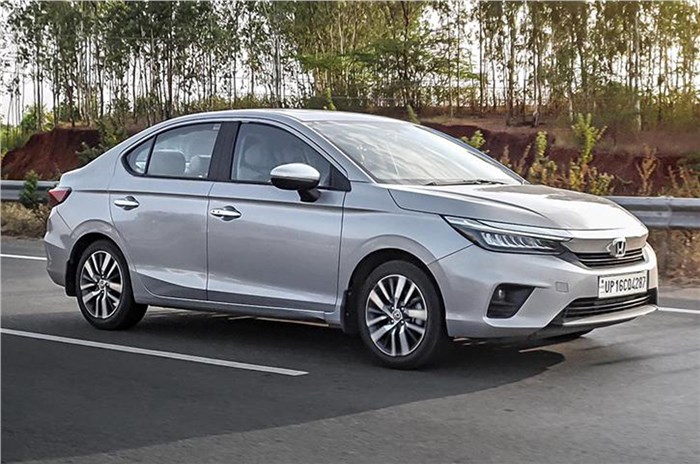 Honda recently launched the City e:HEV hybrid in India as the new flagship in the City range. In
Honda’s India car line-up, the City continues to be a key model, which is why it is still sold in its fourth-gen guise along with the fifth-gen iteration. Honda has now silently introduced mild updates to both generation of the City sedan in India.

Honda continues to sell the 4th-gen City in India in two trims – SV and V – and only in a petrol-manual guise. With this latest update, the base SV trim has been additionally equipped with a 7.0-inch touchscreen infotainment system. This was so far only available on the higher-spec V trim.

The infotainment system, however, is Honda’s previous-gen software and does not get the latest tech and features. Surprisingly, despite the addition of the new touchscreen, prices for the 4th-gen City SV trim remain unchanged.

The 5th-gen City, however, sees a few minor deletions. First up, the base V trim will not be offered with front and rear mud guards as standard anymore. Secondly, the interior door handles, which were previously finished in chrome, are now plain, black plastic door handles on all the trims.

However, the biggest loss is that of a full-size spare wheel. The 5th-gen City was so far offered with a dual-tone 16-inch spare alloy wheel, but that has now been toned down to a 15-inch steel space saver unit.

While the new touchscreen on the 4th-gen City is certainly a welcome addition, the updates on the 5th-gen City are simply cost-cutting measures. The City is offered with a pair of 1.5-litre petrol and diesel engines with a manual gearbox as standard or a CVT automatic for the petrol.

In another interesting update, Honda will be removing trim badges from all their models in India. That means the various trims – such as V, VX and ZX – badges of which were put on tailgate, will be done away with. There’s just one exception though – the e:HEV badge on the City Hybrid’s boot lid will be retained.

Honda’s current model line-up in India is completely devoid of SUVs, but that’s about to change soon. The carmaker is working on two new SUVs – a compact SUV to rival the likes of Kia Sonet and Maruti Brezza along with a midsize SUV to rival the likes of Hyundai Creta. Both these models will be based on an updated version of the Amaze platform. You can read more about these upcoming models in May 2022 issue of the Autocar India magazine.

What do you think of the updates on both generations of the City? Let us know in the comments below.

Purely retrograde steps and drastic cost cutting in the 5 th gen is sure to back fire and raise a hue and cry that's sure to fall on deaf ears of Honda India, which is deaf, blind and a tortoise when it comes to fulfilling market sentiment...

Purely retrograde steps and drastic cost cutting in the 5 th gen is sure to back fire and raise a hue and cry that's sure to fall on deaf ears of Honda India, which is deaf, blind and a tortoise when it comes to fulfilling market sentiment...