All-new SUV is set to be globlly unveiled; gets fresh styling, in line with the new Honda SUV line-up. 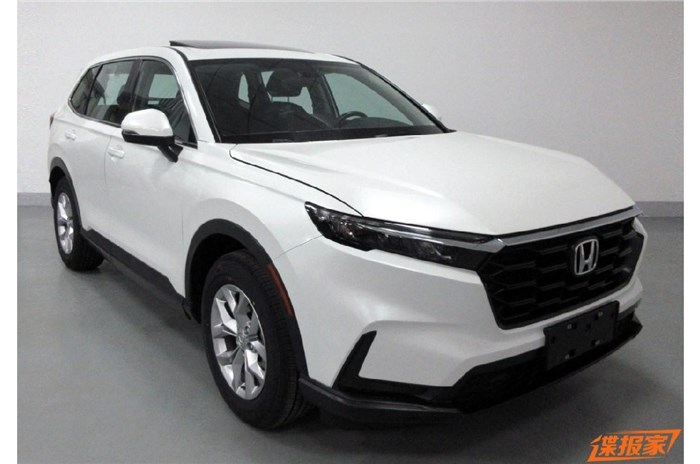 Honda is all set to introduce an all-new CR-V globally. The model may not be available in India anymore but still remains a strong seller for the brand overseas, particularly in the North American and Chinese markets. The new CR-V seen here in pictures will replace the fifth-generation SUV that made its debut back in 2016 with a mid-cycle refresh in 2019.

Next-gen Honda CR-V: what all is new?

The CR-V seen here is an all-new SUV that will globally enter its sixth generation sometime later this year. Its styling is a complete departure from its predecessor's and the new CR-V gets a more upright silhouette, and is dimensionally bigger than the outgoing model.

The front of the new CR-V gets Honda’s latest family look, similar to what we have seen on the new Honda HR-V, the new Civic, as well as the RS midsize SUV concept that was unveiled last year in Indonesia. The new CR-V features a flatter, more upright nose and a new honeycomb pattern hexagonal grille. Flanking the grille are slim headlights that are connected by a prominent chrome strip. Moreover, the bumpers feature a wide central air intake, angular creases, and some plastic cladding. Honda might introduce a slightly altered grille design for other markets, similar to what we have seen on the HR-V SUV.

Across the side, the new CR-V carries a minimalistic look, with only one character line below the glasshouse. It also looks more angular compared to the outgoing version. There is plastic cladding on the wheel arches and doors, and it gets a 10-spoke design for the alloy wheels. From the rear, the CR-V continues to get vertically positioned tail-lamps, like in all the previous generations. The rear design, especially of the tail-lamps, looks similar to that of Volvo SUVs.

There are no interior pictures of the new CR-V yet, but it is likely that the cabin will be more premium and better equipped than the current-gen model. There are no details of the seating options, but the current CR-V is offered in 5- and 7-seat configurations, depending on the market. We expect the new-gen model to carry forward the same seating layouts.

As far as engine options go, the sixth-gen CR-V is likely to get a 193hp, 1.5-litre turbo-petrol engine and a 2.0-litre petrol-hybrid engine with twin electric motor set-up. Additionally, Honda could also offer the 1.5-litre petrol engine with its e:HEV mild-hybrid technology, similar to what’s offered on the HR-V.

Next-gen Honda CR-V: will it come to India?

The CR-V came to India in its second generation in 2004. The carmaker sold the SUV as a full import for two generations until the fourth-generation model was launched via the CKD route in 2013. The company unveiled the fifth-generation model in 2018 with both petrol and diesel engine options, unlike the previous generations that came only with a petrol engine. The diesel engine, however, was discontinued after a shift to BS6 emissions in 2020. The CR-V and the Civic were axed entirely in December 2020.

It remains to be seen if Honda would launch the new-gen CR-V in India. However, the carmaker is working on a new Creta-rivalling SUV based on the City platform for the Indian market.