The new-gen Celerio is larger, more stylish, better equipped and a lot more fuel efficient than its predecessor. We take a close look.

The second-gen Celerio is Maruti’s newest kid on the block and an all-new hatchback from the brand after a really long gap. And all-new it is, boasting a fresh design, completely new interior with lot more features, new platform and even a new engine. In fact, Maruti’s claim to fame with this new Celerio is its class leading fuel economy of 26.68kpl (ARAI-certified), which also makes it the most fuel-efficient petrol car currently on sale in India.

The new-gen Celerio is based on Maruti’s modular Heartect platform and is slightly larger than its predecessor. In fact, the new Celerio has an identical wheelbase to the Wagon R, which is also underpinned by the same architecture. The Celerio rivals the likes of the Hyundai Santro and Tata Tiago in the entry-level hatchback segment, and also the Wagon R from Maruti’s own stable, as prices of both models largely overlap each other. Here we take a closer look at what the new Celerio brings to the table.

In terms of exterior design, the new Celerio is a complete departure from the outgoing model. The squarish and angular design of the outgoing car is replaced by smooth curves and a more rounded design. The face is characterised by oval-looking headlamps, joined by a chrome strip that runs through a newly designed oval grille with honeycomb-like elements. The nose is more upright than before and the front bumper is well-sculpted, featuring black contrasting trim on the apron and around the fog lamps. 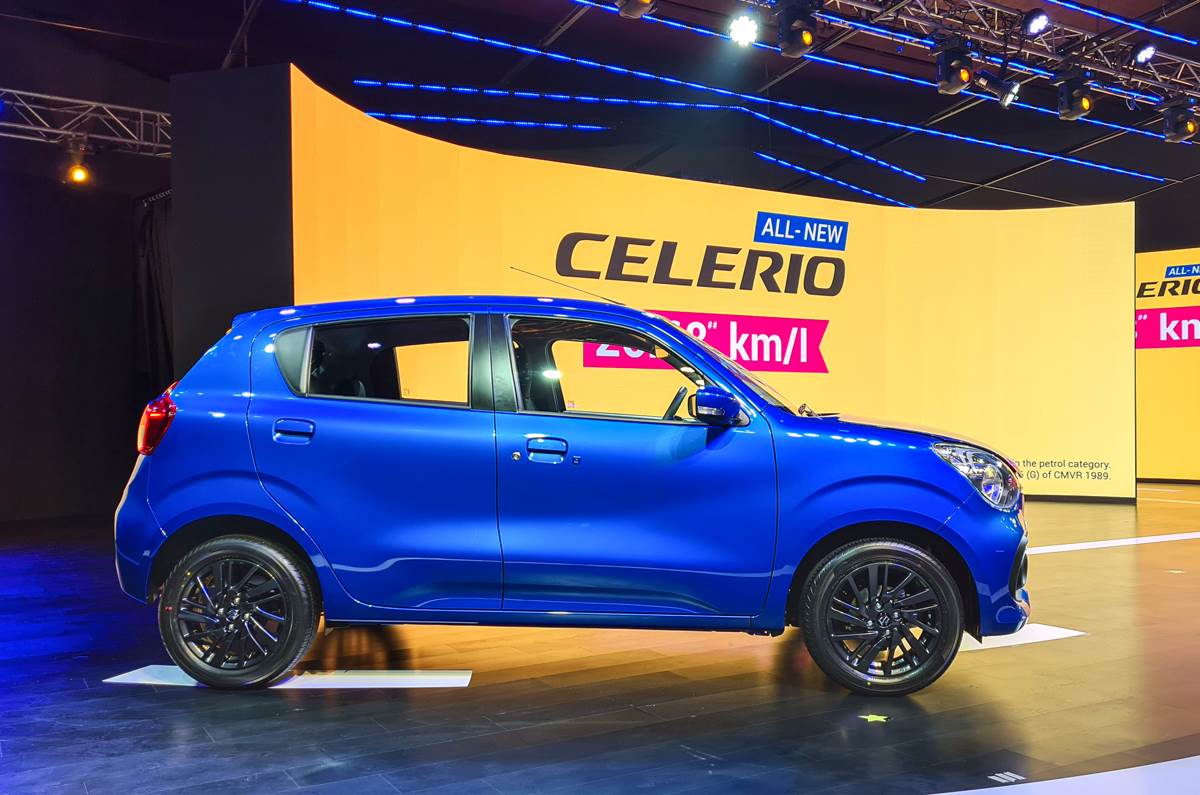 The new Celerio has a 10mm longer wheelbase than its predecessor.

In profile, the new Celerio gets body coloured wing mirrors and lift-type door handles. It also gets a larger glass house and a tapering roofline, although the shoulder line is pretty straightforward. The Celerio’s flowing curves are best seen on the doors and the 15-inch darkened alloy wheels further add to the grown-up appeal. The rear profile is rather simple, featuring rounded tail-lamps and a well-contoured bumper with black inserts. The Celerio in available in six monotone colour options – Arctic White, Silky Silver, Glistening Grey, Solid Fire Red, Speedy Blue and Caffeine Brown.

The interior of the new Celerio has been completely redesigned as well. The highlight is the new floating 7.0-inch touchscreen console, flanked by vertical AC vents on either side. In fact, this is the first time the Celerio is being offered with a touchscreen, running Maruti’s SmartPlay Studio infotainment system. Other elements, like the instrument console and steering wheel, are shared with the Wagon R, adding a sense of familiarity. Larger dimensions mean the new Celerio is also more spacious on the inside.

The cabin has an all-black theme that’s contrasted with faux aluminium accents on the steering wheel, AC vents and centre console. If you want to jazz up the interior of the Celerio even further, Maruti is also selling an interior styling kit as an optional accessory, which essentially adds some body-coloured trims to the dashboard, giving it some element of colour.

In terms of features, the new Celerio is miles ahead of its predecessor, although it still misses out on a few key features, compared to its rivals. Some of the highlights of the Celerio's top-spec variants include the new 7.0-inch screen with Android Auto and Apple CarPlay connectivity, push-button start-stop, electrically adjustable outside rear view mirrors, keyless entry and go, height-adjustable driver’s seat, voice recognition, auto up-down for driver’s window, steering-mounted controls, 60:40 rear split seats, rear wiper and defogger, among others. 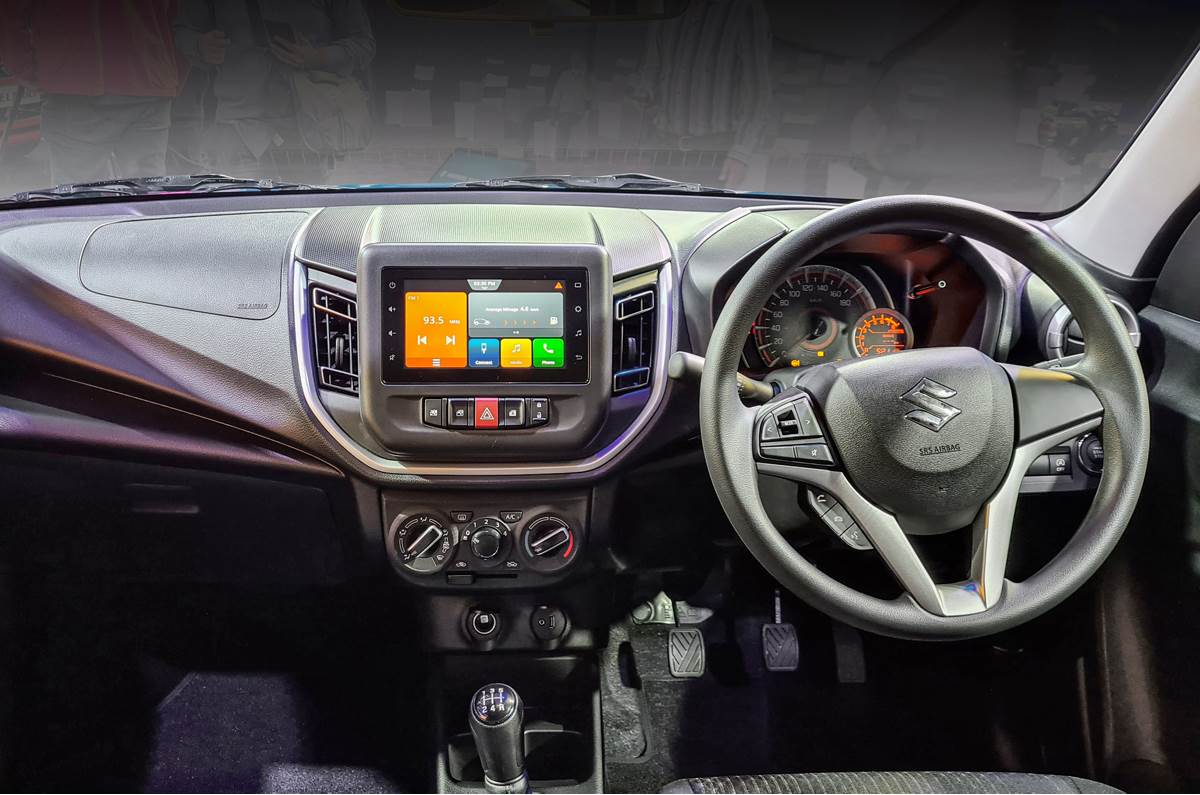 The switches for the front power windows are oddly placed just below the touchscreen.

Safety features on the new Celerio include dual airbags, ABS with EBD and brake assist, rear parking sensors, speed-sensitive door lock and even hill hold assist for the automatic variants. However, the Celerio still carries over manual air-conditioning, while rivals like the top-spec Tiago have automatic air-conditioning. Moreover, it also misses out on a rear parking camera, something that’s offered on most of its rivals. It also worth mentioning that the front and rear power window buttons are rather oddly placed, being just below the screen and on the centre console, respectively, and seem more like an afterthought. In fact, a similar arrangement is also seen on the S-Presso, which is a much cheaper car.

The biggest highlight of the new Celerio is, of course, its new-gen K10C engine. This BS6-complaint, 1.0-litre, naturally aspirated, three-cylinder petrol engine produces 67hp and 89Nm of torque. Power and torque figures are down by 1hp and 1Nm from its predecessor, but on the upside, it is way more fuel efficient than the outgoing model, thanks to DualJet technology and idle start-stop system. The DualJet tech brings in two fuel injectors per cylinder instead of one, resulting in more precise control and finer fuel atomisation. The idle start-stop system further improves fuel economy by cutting off the engine when idling in traffic. Maruti's new K10C engine is currently the most fuel-efficient petrol engine in India.

This gives the Celerio a record-breaking fuel-economy of 26.68kpl for the mid-spec VXi AMT variant. The ZXi and ZXi+ AMTs deliver 26kpl. Meanwhile, the LXi MT returns 25.24kpl and the VXi, ZXi and ZXI+ MTs return a fuel economy of 24.97kpl. These figures have been verified by ARAI.

As mentioned, the Maruti Celerio rivals the likes of the Hyundai Santro and Tata Tiago. Priced between Rs 4.99 lakh-6.94 lakh, the Celerio is the most expensive hatchback in its class. Not only does it have one of the highest starting prices in this class, but its top-end AMT variant is the most expensive of all models in this class. Meanwhile, prices for the Santro range between Rs 4.77 lakh-6.45 lakh, while the Tata Tiago is priced between Rs 5 lakh-6.93 lakh. From Maruti’s own stable, the Celerio is costlier than the Wagon R as well, with prices for the latter ranging between Rs 4.93 lakh-6.45 lakh.