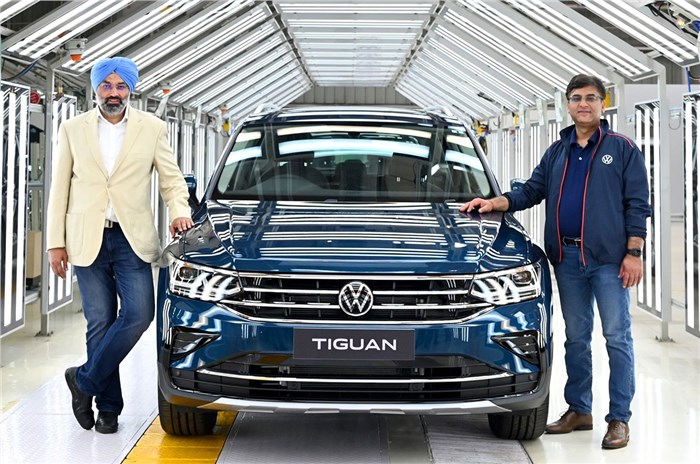 First units of the Tiguan roll off the assembly line at VW’s Aurangabad plant; will be a petrol-only SUV.

Volkswagen has commenced local assembly of the Tiguan facelift ahead of the SUV’s launch in India on December 7. The standard Tiguan will return on sale after over a year’s gap with the carmaker having replaced the older model with the larger Tiguan AllSpace in the transition to BS6 last year.

Commenting on the occasion, Gurpratap Boparai, managing director, Skoda Auto Volkswagen India Pvt. Ltd, said, “We are extremely delighted to bring back the 5-seater Tiguan for the Indian market and are confident that the product will meet the unceasing demand for a sharp, elegant and robust SUV in the segment.”

The Tiguan that returns to the Indian market is the facelifted model that was revealed for international markets last year. The India-spec model was revealed earlier this year. The facelift brings with it a host of design updates from a revised front fascia replete with a new grille, headlamps and bumper. Round the back the tail-lamps get new graphics, a revised bumper while the SUV’s name is now spelled out on the tailgate.

Inside, the cabin is similar to the larger Allspace, with the most notable change being the move to a touchscreen-based climate control system over the older car’s analogue controls.

While the older Tiguan was a diesel SUV, the Tiguan facelift makes the switch to petrol with VW no longer offering a diesel engine in its range of cars and SUVs in India. Powering the SUV will be the familiar 2.0-litre TSI turbo-petrol engine also used in the Allspace putting out 190hp and 320Nm of torque. A 7-speed dual-clutch auto gearbox will be standard along with 4Motion all-wheel drive.

The Tiguan facelift will go up against premium SUVs such as the Hyundai Tucson and Jeep Compass. Expect prices to be in the range of Rs 26 lakh-29 lakh (ex-showroom).