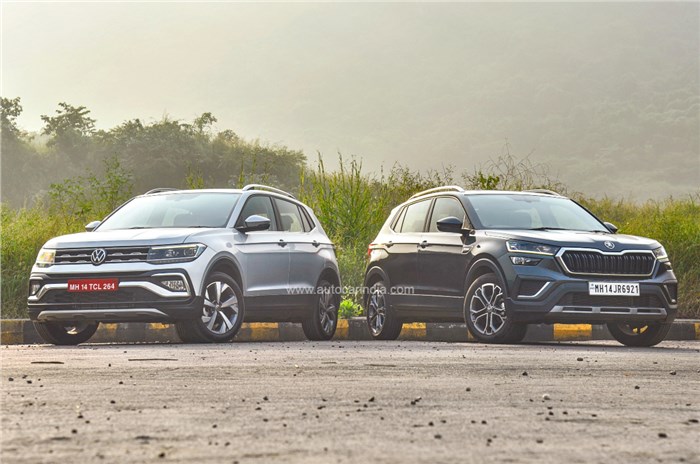 Skoda and Volkswagen have both silently hiked prices for their respective midsize SUVs, the Kushaq and Taigun. The Skoda sees a price hike in only one variant, while the Volkswagen’s price has been hiked throughout the range.

Skoda has hiked the prices of the base Kushaq Active 1.0 TSI MT variant by Rs 30,000, and so the range now starts at Rs 10.79 lakh (ex-showroom, India), compared to Rs 10.49 lakh when it was launched. Interestingly, Skoda has only hiked prices for this variant, with prices for the rest remaining unchanged. The Kushaq now ranges from Rs 10.79 lakh-18 lakh (ex-showroom, India). Recently, Skoda also updated the Style AT variants of the Kushaq with six airbags.

The Skoda Kushaq and Volkswagen Taigun are available with two turbo-petrol engine options – a 1.0-litre TSI and a 1.5-litre TSI.

In terms of output, the 1.0-litre, three-cylinder TSI unit produces 115hp and 178Nm, while the larger 1.5-litre, four-cylinder TSI unit develops 150hp and 250Nm. Both engines get a 6-speed manual gearbox as standard. Automatic gearbox options include a 6-speed torque converter for the 1.0 TSI and a 7-speed DSG dual-clutch automatic for the 1.5 TSI. Furthermore, the 1.5 TSI engine also comes with fuel-saving cylinder deactivation technology.

Skoda currently has two launches in the pipeline for India – the all-new Slavia sedan and the petrol-powered Kodiaq SUV. The production-spec Slavia, which replaces the ageing Rapid, was revealed on November 18 and is scheduled for a launch in early 2022. Meanwhile, the Kodiaq will return to India with a 190hp, 2.0-litre turbo-petrol engine, with a launch likely to take place before the end of this year.

Volkswagen, meanwhile, is gearing up to launch the facelifted, 5-seater Tiguan SUV on December 7. This will be followed by the Virtus sedan, a replacement for the Vento, which is set to launch in April 2022.