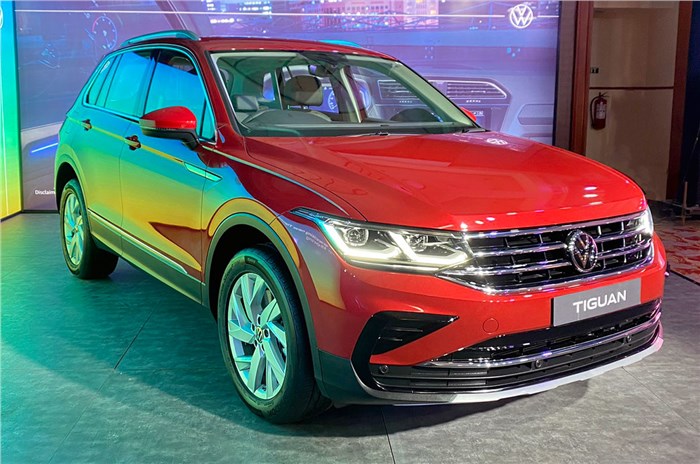 Volkswagen has launched the Tiguan facelift in India at an introductory price of Rs 31.99 lakh (ex-showroom, India). Bookings for the SUV are open with deliveries set to commence from mid-January 2022. The five-seater SUV is locally assembled at VW’s Aurangabad plant and is available in a single fully-loaded Elegence trim.

The move to locally assemble the Tiguan in India seems to have had little effect on the SUV’s pricing, with the five-seater SUV costing about Rs 2.21 lakh lesser than the larger three-row Tiguan Allspace. The now-discontinued Allspace, was priced at Rs 34.20 lakh (ex-showroom), and was imported as a CBU.

The new Tiguan retains the squared-off design of the outgoing model, but gets some key changes to set it apart. Exterior changes on the Tiguan facelift include new, sharper headlights, a new front bumper and a tweaked front grille. It also features a new design for the 18-inch alloy wheels, a re-profiled rear bumper, new LED elements in the tail-lights and Tiguan lettering on the tailgate.

Inside the cabin, the new Tiguan’s dashboard design and layout is similar to the outgoing model, with the biggest change being the touchscreen climate control system, which replaces the traditional buttons and knobs. The Tiguan facelift also gets Volkswagen’s new steering, as seen on the Taigun SUV, replete with the brand’s new logo.

This 2.0-litre engine replaces the 143hp, 2.0-litre TDI turbo-diesel engine, that was on offer with the older five-seater Tiguan.

What do you think about the Volkswagen Tiguan facelift’s prices? Would you pick it over its rivals? Let us know in the comments section.

RAVINDRA PRASAD B - 50 days ago

Yes, The Build Quality & Performance is far more better than other Rivals.

RAVINDRA PRASAD B - 50 days ago

Yes, The Build Quality & Performance is far more better than other Rivals.