Toyota’s special edition Land Cruiser SUV gets multiple cosmetic changes; only 1,200 units of the Heritage edition will be made. 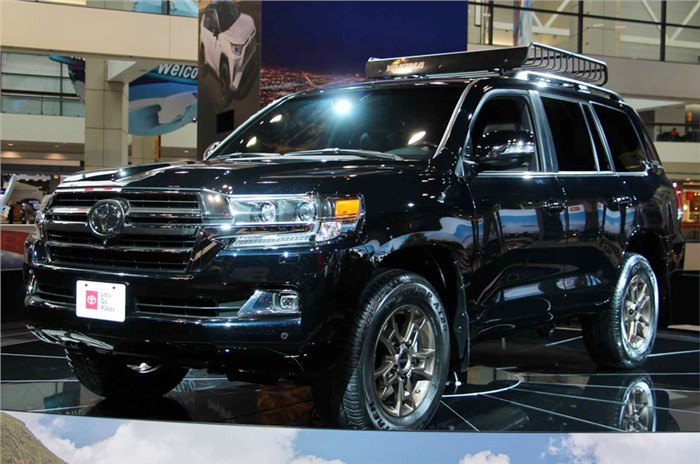 The Toyota Land Cruiser Heritage Edition has been revealed before its debut at the Chicago motor show. The Japanese brand has had the Land Cruiser in its line-up for a long time now; to be specific they will be celebrating 60 years of the full-size SUV (not including its initial years as the BJ in 1951) with the new Heritage Edition. The Land Cruiser has a massive following due to its great off-road capability and reliability.

The main change on the Heritage Edition is that all the chrome-finished bits – like the grille, rear-view mirrors, tailgate, etc. – have been instead finished in darkened chrome. The SUV gets 18-inch BBS wheels that are finished in bronze and are exclusive to the Heritage Edition. Toyota has also removed the side steps from the SUV to hark back to its purpose-built off-roader look. The limited-run Land Cruiser SUV is offered in only Midnight Black Metallic and Blizzard Pearl colours options.

On the inside, the SUV is trimmed in all-black leather upholstery, with bronze contrast stitching. Special all-weather floor mats and floor lining are also part of the package. The Heritage Edition will be sold only as a five-seater with no option to spec a third row of seating.

On the mechanical front, it continues to use the 5.7-litre V8, which produces 386hp and 544Nm of torque, from the top-end Land Cruiser on sale in the US. The engine is paired to an 8-speed automatic transmission and a four-wheel-drive system.

Only 1,200 units of the Land Cruiser Heritage Edition will be sold, with sales beginning later this year in international markets. There is no word from Toyota regarding which markets it will be offered in.