Toyota has lined up multiple launches for India this year, including an all-new MPV and a Creta-rivalling SUV. 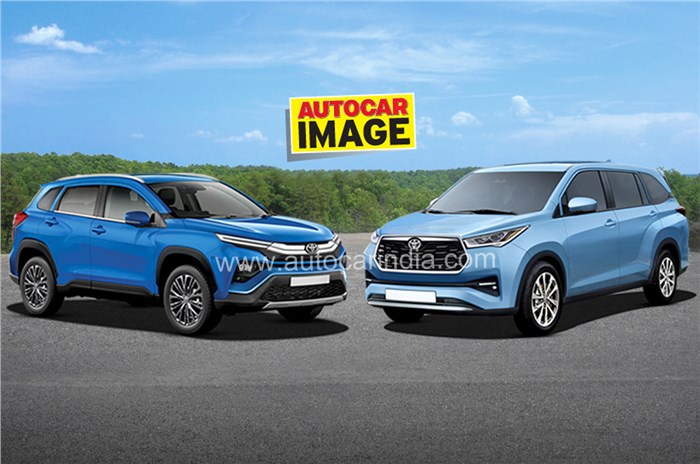 Toyota has lined up several launches for India this year, and has now trademarked two names – Hyryder and Innova Hycross. We suspect these could be the names of the upcoming Creta-rivalling SUV and the new Innova, respectively.

Toyota is readying two new products for India, and the trademarked Hyryder name, we suspect, could be the name of its upcoming Creta rival that it's making in collaboration with Maruti Suzuki.

This new SUV, internally codenamed Toyota D22, is based on the cost-conscious DNGA modular platform – the carmaker also has a more premium TNGA platform – seen in several Toyota and Daihatsu offerings globally. This new SUV will be positioned in the hotly contested midsize SUV segment that has models like the Hyundai Creta and Kia Seltos. Maruti Suzuki will also have its own version of this SUV that will be sold at Nexa outlets. Click here to know more on Toyota’s upcoming Creta rival.

In our cover story of the May 2022 issue of the Autocar India magazine, we reported that Toyota is preparing to launch an all-new Innova, most likely by Diwali. This new MPV will feature a car-like monocoque chassis, instead of a truck-like ladder frame. Toyota has chosen to base the all-new Innova on the TNGA-C, or just GA-C (Global Architecture), which will have a 100mm longer wheelbase – around 2,850mm – than the Innova Crysta. The new Innova will have a distinctive look and will have styling which will be a mix of the Corolla Cross SUV and the Veloz sold overseas.

Interestingly, both trademarked names begin with “Hy”, which likely confirms Toyota’s intention of using hybrid powertrains. Like a few other brands, Toyota seems to be focusing on alternative and more economical fuel technologies and has already begun promoting full-hybrid tech in India – which includes only the Camry for now. And Toyota intends to take its full-hybrid tech more mass market with its upcoming product range that includes the Creta-rivalling SUV and the new Innova, among other future products.

Current Toyota Innova Crysta to be sold alongside next-gen model

Super News.. After knowing about Camry Hybrid.. i am eagerly expecting to have this Hybrid feature in Creta Rival, Innova and Fortuner vehicles.. very Happy by knowing about this.. in electric mode if Toyota provides more range is very good..

Super News.. After knowing about Camry Hybrid.. i am eagerly expecting to have this Hybrid feature in Creta Rival, Innova and Fortuner vehicles.. very Happy by knowing about this.. in electric mode if Toyota provides more range is very good..