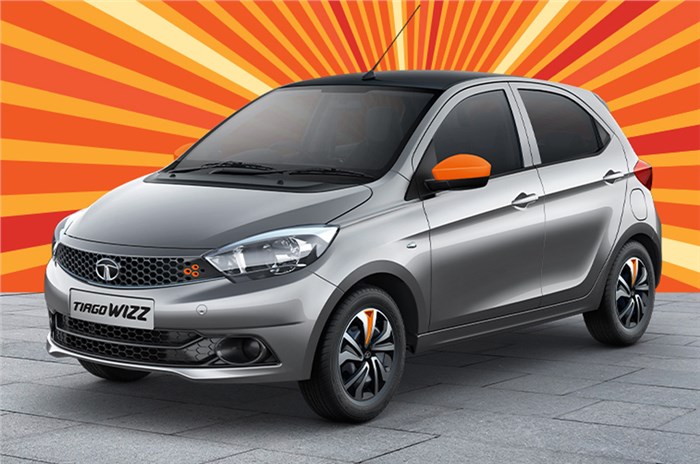 In anticipation of the upcoming festive season, Tata Motors has launched a new special edition ‘Wizz’ variant of the Tiago hatchback. Priced from Rs 5.40 lakh (ex-showroom, Delhi), the Wizz is based on the mid-spec XZ variant (but is priced at about Rs 10,000 more) and sports some cosmetic tweaks over the standard model.

Changes on the outside to the limited-edition hatchback include a titanium grey body colour, contrasting gloss black roof, orange detailing in the front grille and in the 'Hyperstyle' wheels, orange-coloured ORVMs and 'Wizz' badging in chrome. Similarly, the interior also features orange detailing around the AC vents, orange stitching for the fabric seats, a titanium grey gear lever and granite black inner door handles.

As such it shares the same level of kit as the Tiago XZ, which includes a 2-DIN audio system with USB, Bluetooth and Aux, steering-mounted controls, a rear parcel shelf, power adjustable wing mirrors and remote central locking.

The Wizz is powered by Tata's 85hp, 1.2-litre Revotron petrol engine (with multi-drive modes) and comes mated to a 5-speed manual gearbox as standard.

There was a Tiago Wizz that had been launched just before the 2017 festive season, which featured similar design-changes and was available with both, petrol and diesel engine options.

Recently, Tata Motors upgraded the Tiago and Tigor’s instrument cluster to a fully digital unit that will be offered on the top-spec XZ+ and XZA+ variants only. The carmaker also revealed that the Nexon EV, which will be powered by the brand’s Ziptron EV technology, will be launched in early 2020. As for its rivals, the Tata Tiago competes with Maruti Suzuki's Celerio and Wagon R, along with the Datsun Go and Hyundai Santro.