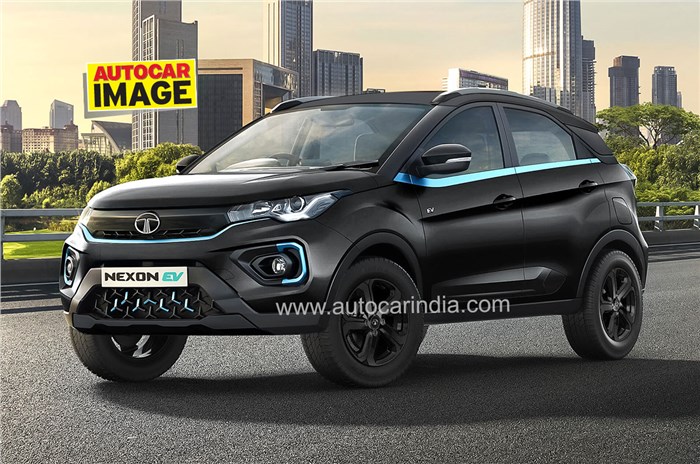 An all-black version of Tata’s Nexon electric SUV is in the works, sources tell us.

Last year, we had reported that Tata filed for trademark for the names ‘Dark’ and ‘Camo’, for its various models in India. The Indian carmaker first introduced the ‘Dark Edition’ with its then flagship SUV, the Harrier, which featured an all-black theme inside and out. And now the second ‘Dark Edition’ offering in the range will most likely be the all-electric Tata Nexon EV.

In its quest to increase the popularity of its all-electric compact SUV, we are told that Tata Motors is readying a ‘Dark Edition’ of the Nexon EV to appeal to a younger set of buyers. This special edition will feature the same Atlas Black paint shade as the Harrier, blackened wheels, and smoked tail lamps for that desired murdered look. On the inside too, the light beige interiors are likely to be replaced by black seats, door pads and dashboard. This variant could feature ‘#DARK’ badges similar to the ones in the Harrier. It will be interesting to see whether or not Tata incorporates the signature blue highlights which are exclusive to the Nexon EV.

Mechanically, there are no changes expected which means this special edition will remain identical to the standard EV, so it will continue to be powered by a 30.2kWh battery that helps its electric motor generate 129hp, and deliver a claimed range of 312km on a single charge. Its real-world range is around two-thirds of that number.

At present, the Nexon EV is offered in three variants – XM, XZ+ and XZ+ Lux, priced between Rs 13.99 and 16.56 lakh, ex-showroom India. Following a similar strategy as the Harrier, Tata could offer the Nexon EV Dark only in the higher variants, and it could be priced at a premium of around Rs 20,000 over a similar specified standard variant.

Was it the Nexon EV Dark Edition you were waiting for and which Tata offering would you like to see a Dark Edition of next? Let us know in the comments below.