The company has filed trademark for Dark Editions, much like the Harrier, and ‘Camo Editions’ of its various models. 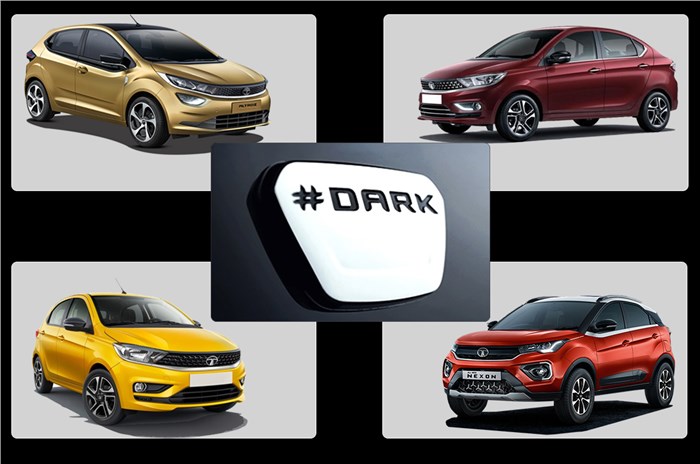 Tata Motors has filed for trademark of new Dark editions for a number of its models. The carmaker has also filled applications for an all-new Camo edition, which is also expected to join Tata’s line-up in the future.

What are the Dark and Camo editions?

Let’s start with the Dark Edition, as we have already seen it on the Tata Harrier. The Harrier Dark edition is offered in both the XZ and XZ+ trims. Its exterior is finished in an Atlas Black paint shade and it gets blacked-out alloy wheels, door handles and front and rear skid plates. It also features grey headlight surrounds and a special #Dark badge. The interiors sport an all-black theme with a black dashboard, door cards, leather seat upholstery along with gunmetal grey inserts around the cabin. We expect a similar treatment to be carried out on the upcoming Dark Edition models.

Coming to the Camo edition, at the moment not much is known about what changes this variant will bring. Though, like with the Dark edition, the changes are expected to be cosmetic in nature.

What Tata models has the trademark been filled for?

Trademarks for both Dark and Camo edition of all current Tata models – which include the Altroz, Tiago, Tigor, Nexon and Harrier – have been filled. Additionally, Camo and Dark edition trademarks have also been filled for the upcoming Tata Gravitas seven-seat SUV.

What else is Tata working on?

Besides the aforementioned Gravitas flagship SUV, the Indian carmaker is also readying a micro-SUV which was previewed by the HBX concept at the 2020 Auto Expo. The production-spec HBX is slated to launch in FY2021 and it will sit below the Nexon in Tata’s India line-up. Tata is also working on the Altroz EV - an all-electric version of the its premium hatchback.

Tata Nexon XM(S) launched; is most affordable car with a sunroof