We pit the upcoming Tata Harrier against its rival SUVs, like the Hyundai Creta, Jeep Compass and Mahindra XUV500, on paper. 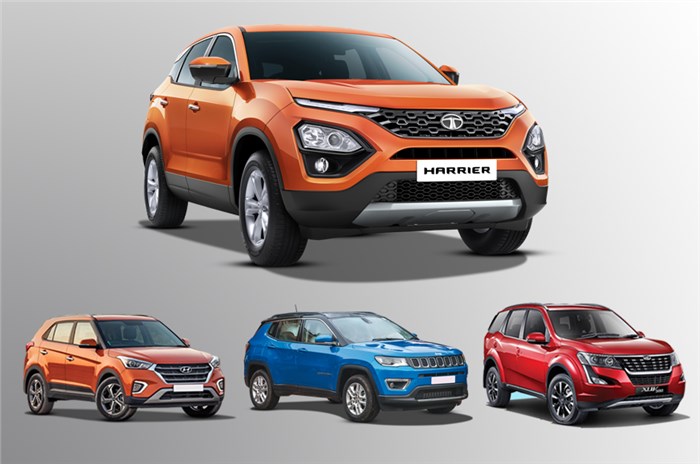 The Tata Harrier is one of the most anticipated launches of 2019. The SUV was revealed in full this month, with the official launch set to take place on January 23. The five-seat SUV has been styled using Tata’s Impact Design 2.0 language and it shares its underpinnings with the Land Rover Discovery Sport and Range Rover Evoque. This means that the Harrier is larger than other SUVs in its price bracket. To put things into perspective, let’s see how the Tata Harrier compares with its rivals – the Hyundai Creta, Jeep Compass and Mahindra’s XUV500.

The Harrier measures 4,598mm in length, 1,894mm in width and 1,706mm in height, and has a wheelbase that is 2,741mm long. As it is based on the same platform as Land Rover’s Discovery Sport, both SUVs share the same wheelbase length and width, though the overall length and height are 2mm and 18mm less on the Harrier, respectively.

In comparison to the Hyundai Creta, the Tata is 328mm longer, 114mm wider, 76mm taller and has a wheelbase that is 151mm longer. The Harrier is also larger than the Jeep Compass by a decent margin. The latter is 203mm shorter in length, 76mm narrower, 66mm shorter in height and has a wheelbase that is 105mm shorter too. The seven-seater XUV500 is also slightly smaller – its wheelbase is 41mm shorter; its length is 13mm less and its 4mm narrower, though it stands 79mm taller than the Harrier. The numbers indicate that the Harrier could have class-leading cabin space.

The Harrier is larger than its competitors, which means it does take a hit in the weight department; weighing in at 1,680kg. The Creta is the lightest of the lot, while the XUV500 is the heaviest. However, the Mahindra and the Jeep come with an all-wheel-drive system that does add to their respective kerb weights, a feature that the Harrier will not get in the near future.

Tata displayed the H5X concept with 22-inch wheels that have been understandably scaled down on the Harrier in the interest of ride comfort. It has tyre sizes between 235/70 R16 and 235/65 R17. The XUV500 has the largest tyres and wheels here, while the Hyundai’s are the smallest in comparison.

The Harrier will only be available in a diesel-manual combination at launch. Hence, we have only considered the same versions for its rivals. The Harrier and the Compass diesel share the same engine and gearbox. However, the Compass has it in a higher 173hp/350Nm state of tune in comparison to the Harrier’s lower 140hp/350Nm state of tune. The Hyundai’s engine is the smallest in displacement, which reflects in its output figures as well. Mahindra’s XUV500 has the largest capacity motor, which is reflected by its higher torque figure. All the SUVs in this comparison come with a 6-speed manual transmission as standard.

In terms of features, the Harrier is at par with its rivals. All SUVs feature six airbags, touchscreen infotainment systems, automatic climate control and leather upholstery. The Harrier gets the largest touchscreen at 8.8 inches, which is closely followed by the Compass’ 8.4-inch touchscreen (in top-spec Limited Plus trim only). The Hyundai and Mahindra both get smaller 7-inch units but come equipped with navigation, which the other two miss out on. Apart from the Creta, all the other SUVs also get the added safety benefit of traction control. The Jeep is the only one here that gets dual-zone climate control and a panoramic sunroof. The XUV500 and Creta do get sunroofs but, in a smaller size while the Harrier misses out on this feature altogether.

Pricing for the Harrier will be revealed at the launch event on January 23, 2019. However, based on estimated pricing, the Harrier is expected to directly rival the Hyundai Creta and the Mahindra XUV500 while significantly undercutting the Jeep Compass. The design and features coupled with an aggressive price tag makes the Tata Harrier a compelling package in the hotly-contested Indian SUV market.