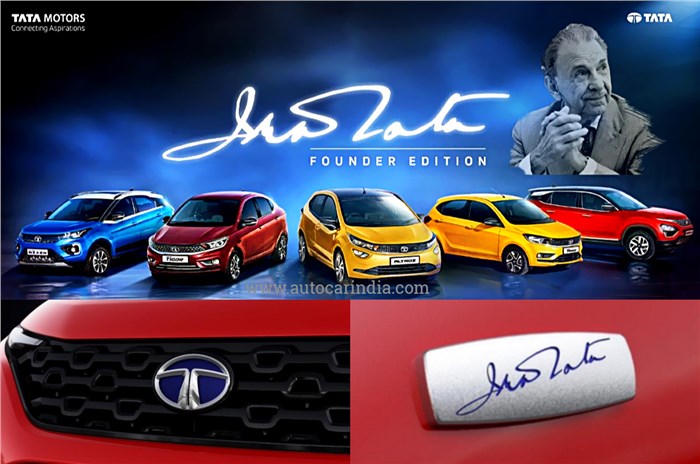 Tata Motors has introduced special Founder Editions of its cars and SUVs, to mark its 75th anniversary. The limited-edition models, which are a tribute to Tata Motors founder JRD Tata, are exclusively available for employees of the Tata Group.

The Founder Edition is available on all Tata models, the Altroz, Harrier, Nexon, Tiago and Tigor. The Tata Safari, which is slated to launch on February 22, will receive this limited edition as well.

The Founder Edition models get a few special touches that set them apart from the regular models. The chrome ‘T’ Tata logo on the front grille and the tailgate gets a blue background and the models also feature JRD Tata’s signature on a chrome plaque. The plaques are placed on the fenders, the tailgate and even on the dashboard. Customers will also receive nineFounder Edition postcards and a photo frame with the purchase of a Founder Edition model.

Tata Founder Edition line-up:  Who can buy one?

The special Founder Edition range has been earmarked for Tata Group employees only.

Tata Motors is currently gearing up to launch the new Safari in India. Bookings for Tata’s flagship SUV will be opened on February 4, with the price announcement set to take place in the coming weeks. Click here to read our review of the new Safari.