We pit Tata’s all-new premium hatchback against its competition in the Indian market. 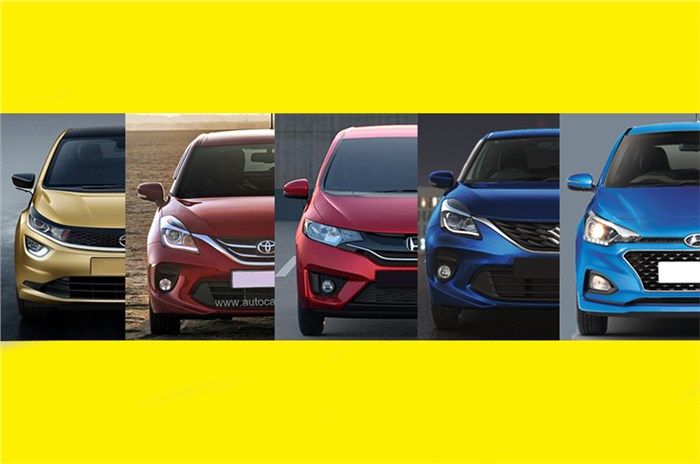 Following much anticipation, Tata has finally revealed the production-spec Altroz. Bookings for the hatchback have opened, with the launch set to take place in February at the 2020 Auto Expo. The all-new model is vying for a piece of the premium hatchback segment; but does it have enough to compete with rivals like Hyundai’s i20, Maruti’s Baleno, Honda’s Jazz and Toyota’s Glanza? Read on to find out.

The Altroz is the first model to be based on Tata’s new ALFA (Agile, Light, Flexible and Advanced) platform. The hatchback, at 1,755mm, is the widest of the lot and has a segment-rivalling wheel size. However, it has the shortest wheelbase, lagging behind the Baleno and Glanza in terms of length; and being 1,523mm tall, also trails the Jazz in height. That being said, the Altroz does get the second-largest boot (at 340 litres) and is the second-lightest as well, which should aid fuel economy. Judging by the overall dimensions, Tata has put the Altroz right in the mix with its competition.

The Altroz petrol will be powered by a BS6-compliant, 1.2-litre, naturally-aspirated, three-cylinder unit that puts out 86hp and 113Nm of torque. While a 5-speed manual will be the only gearbox on offer at launch, Tata is also working on introducing an automatic option at a later stage. The hatchback was expected to get a Nexon-sourced 102hp, 1.2-litre, three-cylinder turbo-petrol unit as well, but information on this engine has yet to be revealed. In comparison to the Altroz, the i20's 1.2-litre unit and the Baleno and Glanza’s K12M engine put out a lesser 83hp, while the Jazz and the K12N-powered Baleno and Glanza put out a higher 90hp. Meanwhile, the Baleno RS’ 102hp, 1.0-litre engine is the most powerful of this lot. In terms of power-to-weight, the Altroz puts out the second-lowest figure while the torque-to-weight ratio is average as well. The Baleno and Glanza clearly have the best power and torque-to-weight figures, owing to their relatively light kerb weight. Being the heaviest in this comparison, the Hyundai i20 has the lowest power and torque-to-weight figures.

As for the diesel-engine variants, all competitors make use of turbocharged four-cylinder units – apart from the Glanza, which does not get a diesel option altogether. Considering Maruti’s announced that there won’t be any more diesels from them after April 2020 - the deadline for BS6 emission norms - the Baleno will join the Glanza in being petrol-only models. The Altroz makes use of a BS6-compliant version of the Nexon’s 1.5-litre engine, albeit in a lower 90hp/200Nm state of tune. Only a 5-speed manual will be available at launch with the Tata. In this comparison, the Jazz’s 1.5-litre engine puts out the most power (100hp) while the 1.4-litre i20 is the torquiest (220Nm). Both, the Hyundai and Honda, also get a 6-speed manual gearbox while the Baleno gets a 5-speed manual unit. In terms of power and torque-to-weight, the Altroz slots in between the competition. The Jazz has the highest power-to-weight figure while the Baleno has the highest torque-to-weight figures for the diesels. It’s also worth noting that the Altroz is the only BS6-compliant diesel in this segment so far.

Prices for the Altroz are expected to range between Rs 5-8 lakh, which should see it undercut the Hyundai i20 and Honda Jazz while being priced on par with the Baleno and Glanza. The competitive pricing coupled with the BS6-compliant engines and features on offer make the Altroz seem like a great package. However, we will reserve our judgment until we do a proper road test and compare it with the rivals in the real world. Till then, watch this space for more.