50 units of Suzuki Jimny 3-door have been built at the Gurgaon plant so far. 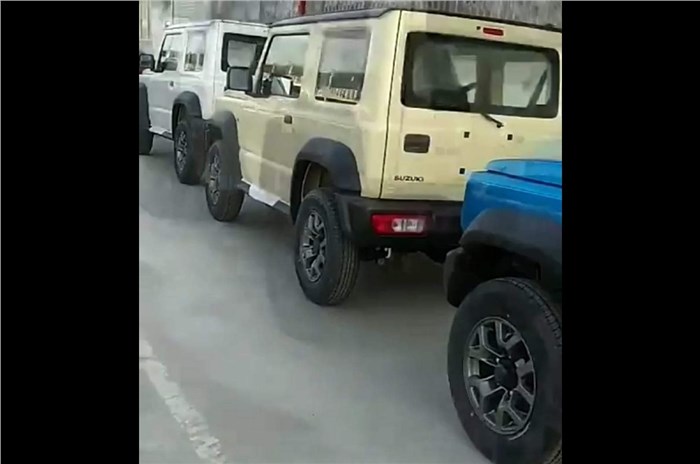 Maruti Suzuki has begun assembling the Jimny SUV in India ahead of its launch next year. 50 units of the three-door Jimny have been assembled at Maruti Suzuki’s Gurugram facility from CKD kits imported from Japan.

Maruti Suzuki has begun trial assembly of the three-door Jimny in India. Done on a line in Gurugram, similar to the one also used for the body-on-frame Gypsy, this first batch of 50 cars are actually produced from imported CKD kits.

As we had earlier stated, India would get a five-door iteration of the Jimny in place of the traditional three-door that will be produced here. Maruti Suzuki officials are of the opinion that a five door version of the car is needed for the Indian market, despite the added expense and time needed to re-engineer the SUV. Interestingly Mahindra is also working on building a five-door version of the Thar, to give it a more mainstream appeal.

The body on frame Jimny has a similar configuration to that of a Gypsy and a Mahindra Thar. Very different from monocoque based SUVs like the Brezza, the Jimny is powered by a longitudinally mounted Suzuki K15B engine that drives either the rear wheels or all four. Making 105hp, this 1.5-litre petrol engine is the same unit, that when transversely located, also drives the Maruti Suzuki Vitara Brezza, Ertiga, XL6 and Ciaz’s front wheels. The Jimny currently also gets a 5-speed manual and 4-speed torque convertor automatic. Meanwhile, a four-wheel drive system with low-range is also standard.

In India the Suzuki Jimny will go up against the Mahindra Thar, that’s also slated to go on sale as a five door later in its model life.