Development of the 5-door Mahindra Thar has been given the go-ahead, as the company aims to widen the appeal of the second-gen 4x4. 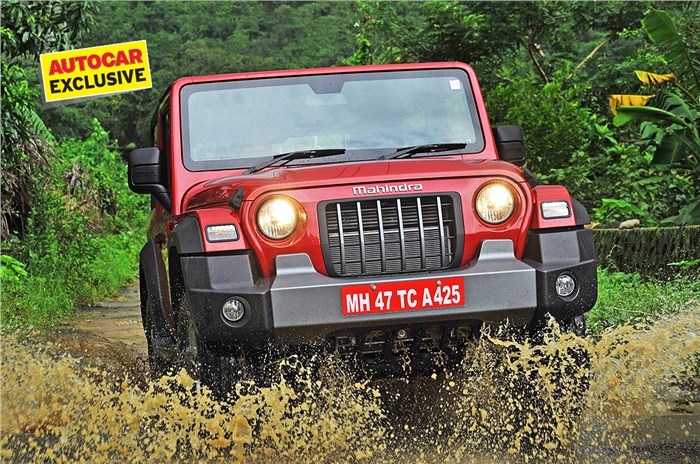 The second-generation Mahindra Thar is easily one of the most highly anticipated launches of 2020. Revealed on India’s 74th Independence Day, after a seemingly endless wait, the Thar – now in its second generation – has evolved to be much more than just a tough-as-nails off-roader, and many are hoping to see a five-door version of the new Thar. Here’s what we know about Mahindra’s plans for a five-door Thar.

Is a five-door Mahindra Thar on the cards?

Mahindra has greenlit the development of a five-door version of the new Thar, which will have an all-new body. Despite the second-gen Thar being positioned as a vehicle that can be driven every day, Mahindra realises the market for the three-door Thar will be limited. In a bid to further widen the appeal of the second-gen model, Mahindra has decided to work on a five-door Thar, which is also likely to have a longer wheelbase.

Commenting on the idea of a five-door version of the new Thar in a recent interaction with Autocar India, Veejay Nakra, CEO of Mahindra’s automotive division, said, “Our objective was to recreate the icon, and obviously the first step in that direction was to create the Thar in its current three-door form. I think that’s a good starting point which we are in. Who knows how the future will play out? Let’s just watch this space as we go forward”. 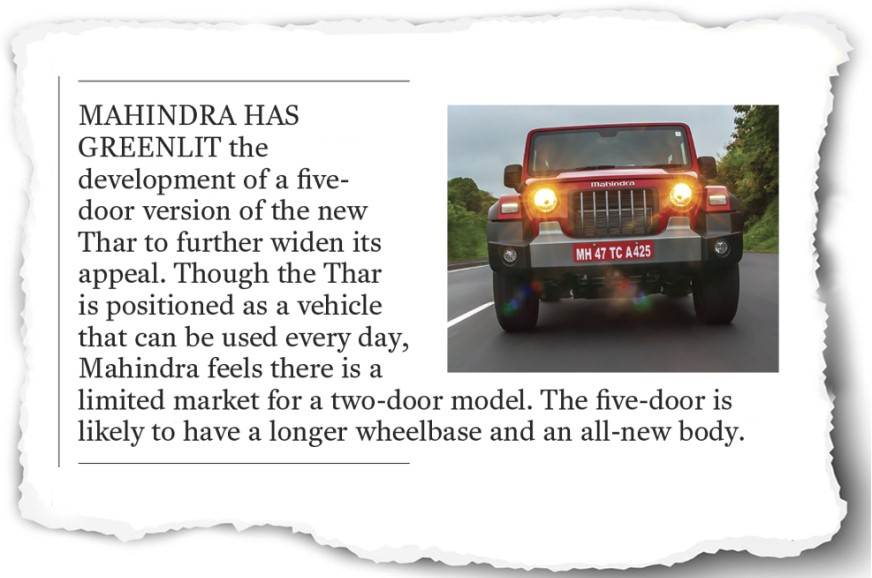 The five-door model will be a key addition to the Mahindra Thar line-up, as its rival-in-chief, the new-gen Force Gurkha, will also be available in three- and five-door forms. Additionally, the Suzuki Jimny is also set to enter India in five-door form.

What are the key things to know about the second-gen Mahindra Thar?

The 2020 Mahindra Thar is based on a new ladder-frame chassis and debuts two new engines. There’s a 152hp, 2.0-litre 'mStallion' petrol that gets a 6-speed manual gearbox as standard and a 6-speed automatic as an option. The diesel engine for the new Thar is a 132hp, 2.2-litre mHawk unit, which is available with a 6-speed manual as well as a 6-speed torque converter automatic. Four-wheel-drive and a manual-shift transfer case are standard on all versions.

On the new Thar’s equipment list are features such as a 7.0-inch touchscreen with Apple CarPlay and Android Auto, roof-mounted speakers, a colour multi-info display for the instrument cluster, steering-mounted controls and cruise control. Safety kit includes dual airbags, ABS with EBD, ISOFIX child-seat mounts, hill-start and descent assist, ESP with roll-over mitigation, and the new Thar is also said to comply with upcoming pedestrian protection norms. It will be available in two variants – AX and LX – and Mahindra says it will be even more capable off-road than its predecessor.

Expect the new Mahindra Thar’s prices to be in the Rs 12-15 lakh (ex-showroom) range when it is launched on October 2, 2020. But before it goes on sale, Mahindra will auction the very first unit of the new Thar, and the proceeds from the auction will be donated to a charity engaged in COVID-19 relief efforts.

Think a five-door Mahindra Thar would be even more popular than the three-door model? Let us know your thoughts in the comments.