Mahindra officials answer some FAQs about the new Thar. 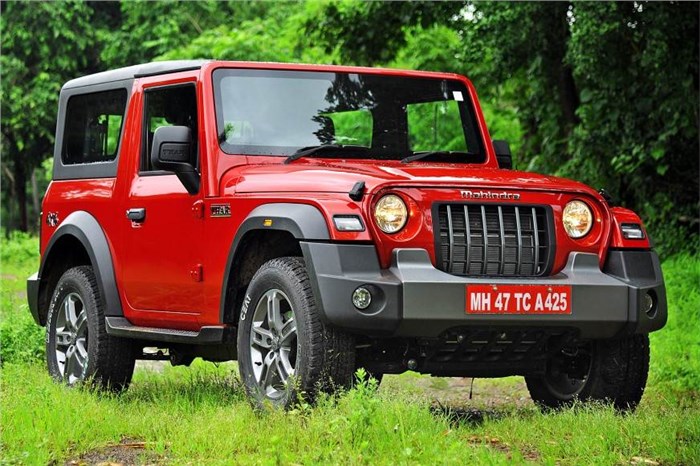 The second-generation Mahindra Thar has been one of the most anticipated cars of the year and is slated to launch on October 2. In a recent interaction with Autocar India, Mahindra's chief of global product development, automotive division, R Velusamy, along with CEO, automotive division, Veejay Nakra, shed some light on the development of the new Thar which helped answer a few questions regarding the 4x4.

How capable is the new Thar off-road?

Mahindra claims that the new Thar is significantly more capable off-road than its predecessor. The new Thar comes equipped with a part-time four-wheel-drive system, with a manual-shift transfer case as standard on both, the petrol and the diesel versions.

The new Thar has a higher ground clearance of 226mm (up by 10 percent) and can wade through 650mm of water (150mm more than old Thar), both of which bode well for its off-road credentials. The approach angle has also been improved to 42 degrees.

“Off-roading capability, what is called as the torque traction of the vehicle, has been increased by 33 percent (over the old Thar)”, said Velusamy. “The breakover angle too has been significantly improved from 24 degrees to 27 degrees and the departure angle is up from 31.6 degrees to 36.8 degrees. So, it’s very significant (the improvement)”, he added.

How safe is the new Thar?

Mahindra has equipped the Thar with safety kit like dual airbags, ABS with EBD, ISOFIX child-seat mounts, hill-start and descent assist, ESP with roll-over mitigation and three-point seatbelts for four passengers. Apart from this, the new Thar is said to comply with upcoming pedestrian norms in the country.

“The new Thar meets all the regulatory requirements of safety. So, you have the frontal offset crash and the pedestrian lower leg impact and then head injury. All three norms are coming, and our car meets the norms ahead of their implementation”, said Velusamy.

On whether the different roof styles affect the safety rating, Velusamy added, “As long as you manage all your impact energies to the chassis, then there’s not much difference if you have the soft-top or the hardtop. That was our primary objective and that’s what we’ve done”. The new Thar has already been crash-tested, with Mahindra set to announce the safety ratings at the time of launch, on October 2.  All in all, the new Mahindra Thar promises to be a much safer vehicle than the one it replaces.

Is there a 5-door Thar in the works?

When questioned about the possibility of a 5-door Mahindra Thar, Nakra said, “Our objective was to recreate the icon, and obviously the first step in that direction was to create the Thar in its current 3-door form. I think that’s a good starting point which we are in. Who knows how the future will play out? Let’s just watch this space as we go forward”.

While there is no official word yet, it is believed that Mahindra is working on a larger, 5-door iteration of the new Thar to further widen its appeal.

Can the hardtop be removed and refitted?

Yes, but it won’t be a DIY project. The new Thar’s hardtop roof can be removed, but only at authorised Mahindra dealerships by trained technicians.

“We need for the body to be united with the base vehicle, for the high-speed performance, etc. So, we don’t recommend the hardtop to be removed without the right tools because the body has to be lifted a little bit to do that”, said Velusamy.

What are the engine and gearbox options on the new Thar?

Where the original Thar was offered only in diesel-manual form, the new Mahindra Thar comes with multiple engine and gearbox options, including a petrol engine and an automatic gearbox for the first time.

How much will the new Thar cost and what are its rivals?

Prices for the new Mahindra Thar will be officially revealed on October 2. Given the added features and increased capability, expect the new Thar to cost substantially more than the outgoing model and a touch below the Scorpio, in the Rs 12-15 lakh bracket.

As for its rivals, the new Thar is a niche product and doesn’t have any direct rivals. That said, the 4x4’s closest competitors will be SUVs like the updated Force Gurkha and the upcoming 5-door Suzuki Jimny.