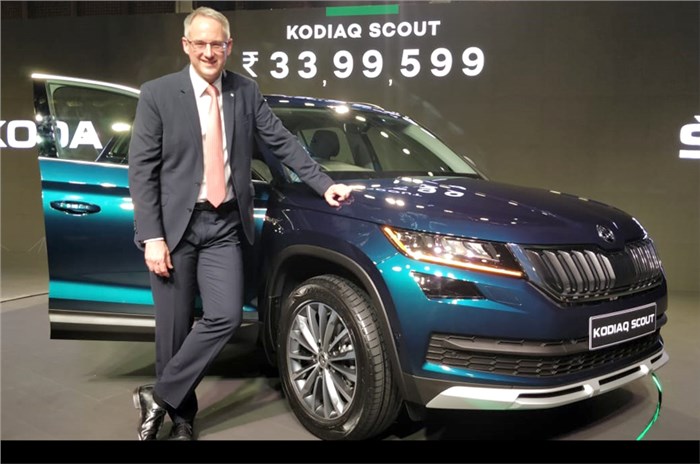 Skoda has introduced a new variant of its flagship SUV – called the Kodiaq Scout – at Rs 33.99 lakh. The Scout sits right in the middle of the Kodiaq range, between the base Style (Rs 32.99 lakh) variant and the top-spec Laurin & Klement (Rs 36.78 lakh) variants.

The Scout features some different design elements, which set it apart from the regular Kodiaq. It sports black plastic cladding with silver metallic inserts on the lower portion of the front and rear bumpers (the new bumpers add around 8mm to the SUV’s overall length), a set of dual-tone 18-inch alloys, ‘Scout’ badges on the front fenders, along with roof rails, ORVM covers  and lower bumper elements finished in silver. The Kodiaq Scout is available in four colour options - Lava Blue, Quartz Grey, Moon White and Magic Black.

The Kodiaq Scout’s cabin gets interior trimmings that are different from rest of the range. The seats come finished in Alcantara leather while the dashboard and doors feature wood inserts with Scout inscriptions. On the equipment front, the Kodiaq Scout shares a fair bit of kit with the top L&K trim including nine airbags, the 9.2-inch touchscreen infotainment system with Apple CarPlay and Android Auto-compatibility (it's paired to a 10-speaker 575W Canton sound system), a powered 12-way adjustable driver's seat, ambient lighting, three-zone climate control, a hands-free parking system and a panoramic sunroof. However, the Scout misses out on the all-digital Virtual cockpit instrument cluster and 360-degree camera from the L&K. Nonetheless the new variant does get two features not available with the range-topping Kodiaq – a tyre pressure monitoring system and an off-road drive mode. Boot space on the Kodiaq Scout with all three rows of seats up is a respectable 270 litres, but expands to a whopping 2,008 litres with the second and third row folded.

The Scout continues to make use of the 2.0-litre turbo-diesel engine that powers the entire Kodiaq range. It produces 150hp and 340Nm of torque, which is sent to all-four wheels via a 7-speed DSG automatic gearbox.

Rivals to the Skoda Kodiaq Scout include the Honda CR-V diesel (Rs 30.67-32.77 lakh*) and the Volkswagen Tiguan (Rs 28.14-31.53 lakh). Skoda recently slashed prices of the Kodiaq Style by Rs 2.38 lakh and introduced a new Corporate Edition at Rs 32.99 lakh, all in an effort to increase sales of the carmaker’s most premium offering in the country.