Codenamed the H6, the three-row Jeep will be a bespoke model and will retain the brand’s off-road focus, as per the company’s design chief. 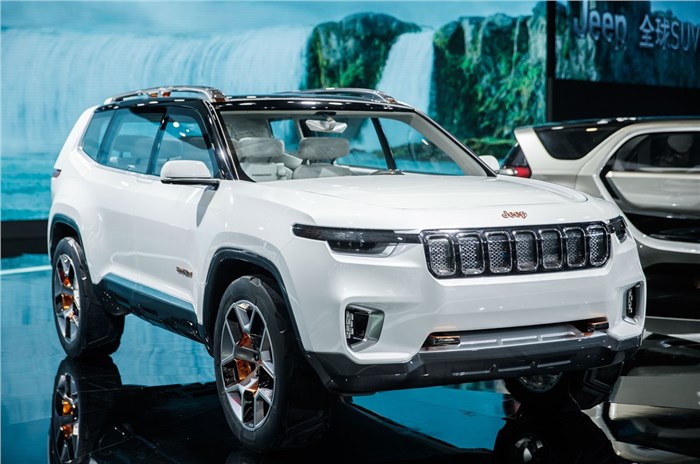 The 7-seat Jeep SUV is being readied for an India launch in H1 2022. Codenamed the H6, the new model will not carry the Compass moniker and, instead, will debut an all-new nameplate, which will likely be revealed on April 4, 2021. Sources tell us that the company has handpicked the particular date for the crucial announcement since it has been observing April 4 (4/4) as the ‘Jeep 4x4 Day’ since 2016.

While a three-row SUV might be a bit at odds with the brand, the Global Head of Jeep Design, Ralph Gilles, has emphasised that the H6 will remain true to the Jeep image.

7-seat Jeep SUV (H6) to be a bespoke offering

Jeep wants the H6 to have its own identity and, as such, the SUV will have design elements to differentiate it from the Compass. However, it will still pack in typical Jeep styling cues. For instance, the brand’s iconic seven-slot front grille will feature on the new model as well. “The Wrangler is still at the core of Jeep’s DNA, so there's a bit of Wrangler in everything that we make. And we work its details into our designs – the Wrangler’s trapezoidal rear wheel arch has found its way into just about every Jeep. It's a subtle thing, but it's subconscious,” said Gilles at a recent media event.

Moreover, though the H6 will share its monocoque platform with the Compass, the new model is said to be packing in significant changes. “The H6 is an absolutely custom vehicle. There's really two bits left from its donor car; it's a very purpose-built vehicle. It's going to be our first (midsize) three-row SUV,” Gilles told Autocar India.

Commenting on the upcoming model’s rugged abilities, the design head told us, “Our engineers don't mess around. So, it's a real Jeep, it'll have real capabilities.”

The H6 will be longer, wider and taller than the Compass, and will even have a longer wheelbase. This could potentially impact the vehicle’s off-road prowess, especially its approach, ramp breakover and departure angles. However, Gilles stressed that the model’s larger footprint will not be an issue. “It is in perfect harmony with its capability. They (engineers) have made up for that by tweaking the ride height and other things, so it’s fine. We have a lot of experience doing this,” he said in response to an Autocar India query.

7-seat Jeep SUV (H6) to get a powerful diesel engine

The Compass’ 2.0-litre diesel engine will also power the H6, albeit in a higher state of tune of around 200hp (compared to 173hp in the 5-seater). A 9-speed torque converter automatic gearbox and all-wheel-drive functionality will be a part of the package as well.

Being a 7-seat monocoque SUV, the H6 will rival the Volkswagen Tiguan Allspace and the upcoming, petrol-only Skoda Kodiaq. However, its touted off-road abilities could also mean that it will be knocking on the doors of even some ladder-frame SUVs like the Toyota Fortuner and Ford Endeavour.

Positioned above the Compass in Jeep’s line-up, the H6 is expected to carry a sticker price of around Rs 30-35 lakh (estimated, ex-showroom).