Jeep’s product offensive will include the Compass facelift, a 7-seat SUV, the locally assembled Wrangler and Grand Cherokee, and a sub-4m SUV that will come in later. 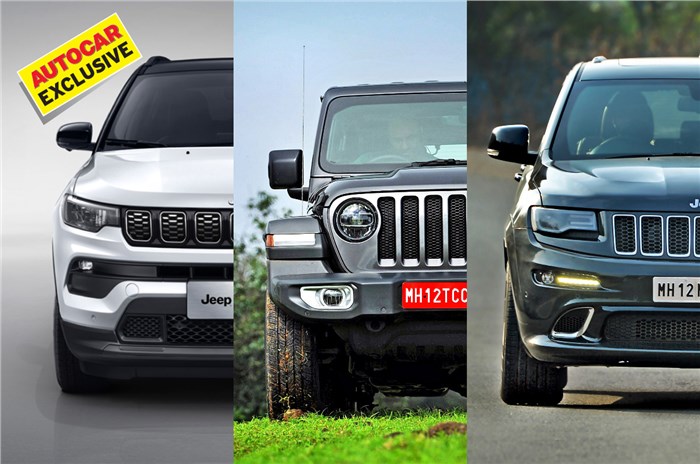 Jeep India is in the process of ramping up its efforts and bolstering its product portfolio for our market. Detailing the company’s strategy, Partha Datta, president and managing director, Fiat Chrysler Automobiles (FCA) India, told Autocar India in a recent interview, “FCA is going to bring in four new products in the next two years, including the new Jeep Compass.” This product onslaught will be followed by Jeep’s rival to the Hyundai Venue, Kia Sonet and Maruti Suzuki Vitara Brezza.

The unveil of the India-spec Jeep Compass facelift has been scheduled for January 7, 2021, and the FCA boss confirmed that the launch will happen soon after. “The new Jeep Compass is slated to be launched in the first quarter (of 2021),” he said. Production of the upcoming model has already commenced at FCA’s joint venture manufacturing facility in Ranjangaon, Pune.

Datta mentioned that the updated Compass will be “fine-tuned” as per the latest trends in the Indian market. So, while it will carry forward its predecessor’s rugged character and 4x4 capability, which are “part of the Jeep DNA”, it will also have “all the other features that people might consider”, including improved connectivity and more space and storage in the cabin.

The Compass facelift will debut the company’s UConnect 5 infotainment system on a new 10.1-inch touchscreen that is likely to feature integrated Amazon Alexa, wireless Apple CarPlay and Android Auto support and over-the-air (OTA) update functionality. It will be interesting to see how this stacks up against offerings from MG and Hyundai, which have considerably taken the game forward in terms of connectivity.

The upcoming Jeep will also up the premium quotient in the cabin, as per the company head. The new model is expected to use improved materials, with a restyled dashboard featuring double-stitched leather inserts and brushed aluminium-like trim.

On the powertrain front, there will be no changes. The Compass facelift will continue with the outgoing model’s 163hp, 1.4-litre turbo-petrol and 173hp, 2.0-litre diesel mills.

However, the variant-wise transmission options are ready to be rejigged. “Customers used to ask for an automatic on the (entry-level) Sport variant, and they will get it this time,” mentioned Datta. Earlier, the petrol Compass was available with a 7-speed dual-clutch auto on all but the base trim level, while the diesel version got a 9-speed torque converter auto on only the 4x4 variants of the Longitude, Longitude Plus and Limited Plus trims.

Going forward, the American automaker is also planning better lifecycle management of its portfolio and more frequent product updates – an area where it has traditionally lagged, costing it valuable market share. “India is an atypical market in case of product reveals. While you can take about three years (for an update) in other markets, in India, you have to do it a lot more frequently,” said Datta. He added that Jeep is trying to draw up “a rapid response, medium range plan and execute it.”

Commenting on expanding Jeep’s India portfolio, Datta said, “We also have a seven-seat Jeep, which is codenamed the H6. It is the first, mid-size, three-row, seven-passenger Jeep SUV. It will launch sometime in 2022.”

Though the new SUV will share its unibody underpinnings with the Compass, Jeep is trying to give it a distinct identity with bespoke styling elements. “This is not a Compass. It will be a brand new SUV, with a brand new nameplate in the Jeep stable. It will be longer, wider and taller than the Compass and we will provide customers all the power they need,” he said.

As such, while the seven-seat SUV’s 2.0-litre diesel engine will be a derivative of the Compass’ oil burner, it will have a beefier output of 200hp. A 9-speed automatic transmission and all-wheel drive will be on offer.

Datta also confirmed that the made-in-India seven-seat SUV will be exported to international markets as well, similar to its five-seat counterpart.

Jeep Wrangler and Grand Cherokee to be locally assembled

To improve sales volumes of its high-end products, Datta said that the company will be “leveraging its local capacity as much as possible to increase localised content.” He clarified, “We will be locally assembling the Jeep Wrangler in Ranjangaon (Pune) and the next-generation Grand Cherokee will also be assembled there.” Both the CKD (completely knocked down) models will hit Indian roads before the end of 2022.

Jeep had launched the fourth-gen, JL-series Wrangler in India in August 2019 in the Sahara trim, and later expanded the range to include the top-spec Rubicon variant. Both are powered by a 268hp, 2.0-litre turbo-petrol engine that sends power to all four wheels via an 8-speed torque converter automatic gearbox.

Currently available as a full import, the Jeep Wrangler is priced at Rs 63.94-68.94 lakh (ex-showroom, Delhi). While Datta refused to comment on future pricing, expect the costs to come down moving forward, owing to lower duties for CKD products. Moreover, India will most likely be only the second manufacturing location for the Wrangler globally, which has traditionally been produced at the company’s Toledo (US) facilities.

The second model slated for local assembly – the Jeep Grand Cherokee – has been discontinued in our market in its current-gen avatar. The American SUV specialist will resurrect the Grand Cherokee moniker in India with the next-gen model that will be brought in as a CKD. The new luxury SUV is set to be bigger and plusher than the outgoing model and will get a range of powertrain options, including petrol, diesel and hybrid.

Following its four-model strong assault on the Indian market, Jeep will also foray into the hotly contested, sub-4m SUV category.  Confirming its launch, Datta said, “I am laser focused on getting the sub-four-metre Jeep to the Indian market. This is being actively developed and is part of the roadmap for the product onslaught that we have. The product architecture and feature content are being fine-tuned.”