To see how the Kiger stacks up in the compact SUV segment, we've put its price and technical specifications up against its eight rivals. 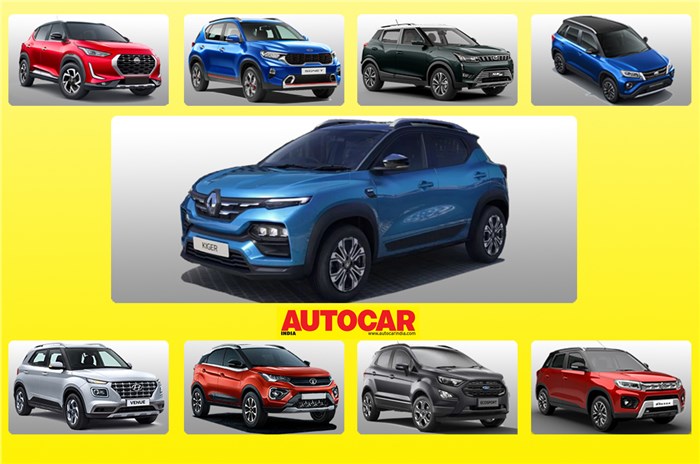 The Renault Kiger has been launched at an aggressive starting price. At Rs 5.45 lakh (introductory, ex-showroom, India), Renault’s compact SUV not only undercuts its CMFA+ platform-based cousin, Nissan’s Magnite, but the other seven compact SUVs on sale right now – the Kia Sonet, Hyundai Venue, Mahindra XUV300, Tata Nexon, Ford EcoSport, Maruti Suzuki Vitara Brezza and the Toyota Urban Cruiser. We have gathered all the technical specifications of the new Renault Kiger and put it up against its rivals' to see how the new compact SUV compares on paper, in terms of dimensions, powertrains and price.

From the table above, it is quite evident that while all models in the segment have similar dimensions, the Renault Kiger is the smallest offering in terms of both length and width. The Ford EcoSport is the longest model (7mm longer than the Kiger), while the Mahindra XUV300, at 1,821mm, is the widest model in the segment and is 71mm wider than the Kiger.

The Kiger’s height is in the middle of the pack. Comparatively, its cousin the Magnite is the shortest offering in the segment (28mm shorter than the Kiger), while the Kia Sonet and Ford EcoSport, standing 1,647mm tall are the tallest models.

Most of the models in the compact SUV segment feature a 2,500mm wheelbase and the Renault Kiger is no different. The only models to stray from the figure are the Nexon, which has the shortest wheelbase at 2,498mm; the EcoSport, which is 19mm longer (2,519mm); and the XUV300, which is a 100mm longer than the Kiger. This also makes the XUV300 the SUV with the longest wheelbase in this segment.

An area where the Kiger excels is its boot space, which, at 405 litres, is the largest in the segment. To put this into context, the XUV300 – which has the smallest boot in this comparison – is 148 litres smaller. On the flip side, the Kiger and Magnite have the smallest fuel tanks in this company, with the EcoSport’s 52-litre tank being the biggest.

It is also worth mentioning that Renault claims that the Kiger has segment-leading cabin space – with 710mm of space between the front headrests, 220mm of rear legroom and 1,431mm of elbow room at the rear.

If we take a look at the naturally-aspirated petrol engine offerings, we can see that the Kiger and Magnite’s 72hp, 1.0-litre unit has the lowest output in this comparison, while the Ecosport’s 122hp, 1.5-litre unit has the highest output. Although it is worth noting that the engine in the Kiger and Magnite has the lowest displacement in this comparison.

Now, looking at the turbo-petrol models, the Kiger’s 100hp, 1.0-litre unit (the same engine as the Magnite's) is a good 20hp short of the output from the 1.0-litre units fitted in the Korean offerings (Venue and Sonet). Its power figure is even 10hp lower than the XUV300’s 1.2-litre turbo-petrol engine. Though, bear in mind, that the Kiger has a kerb weight of just 1,012kg, which could make it much sprightlier than what the power and torque figures let on.

Coming to the manual gearbox options, all models come with a 5-speed manual, barring the XUV300 and Nexon, which get a 6-speed manual, along with the Venue and Sonet turbo-petrols, which come with the 6-speed iMT 'clutchless manual' gearboxes.

In terms of automatic gearbox options, the Kiger one-ups the Magnite as it comes with a 5-speed AMT with its NA engine and a CVT with its turbo-petrol (the Magnite doesn’t offer an auto with its NA engine). The other offerings in the segment have a mix of automatic gearbox options as the Nexon and XUV300 come with an AMT unit, the Venue and Sonet are available with DCT autos, while the Vitara Brezza, Urban Cruiser and EcoSport all come with torque converter automatics.

It is also worth pointing out that a number of models in the segment including the Mahindra XUV300, Tata Nexon, Kia Sonet, Hyundai Venue, and Ford EcoSport are also sold with diesel engine options.

While the Kiger’s starting price does undercut its rivals for now (prices are introductory and will increase at a later date) the top-spec version is costlier than the Magnite’s by a Rs 10,000 margin. As before, the top-spec Sonet is by far the most expensive compact SUV, with its Rs 12.89 lakh price tag, with the XUV300 and Venue following. The Urban Cruiser, Nexon and Vitara Brezza sit in the middle of the compact SUV segment, in terms of price, for now.