eXUV300, eKUV100 and Atom EV quadricycle will be showcased too. 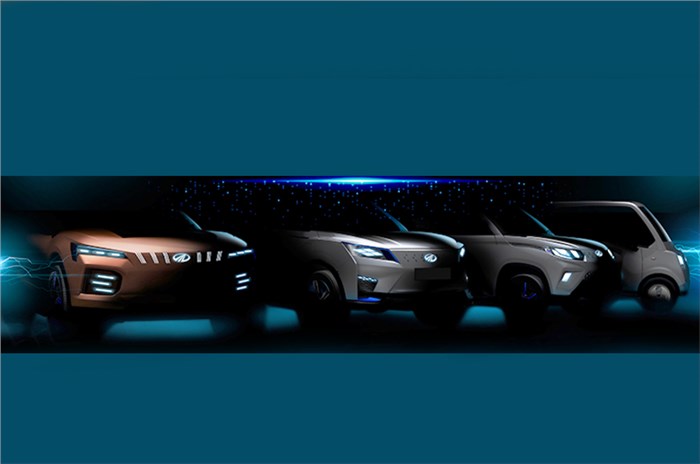 Mahindra has announced that it will showcase four new electric vehicles at the upcoming 2020 Auto Expo. The carmaker has released a first image that gives a glimpse of its Auto Expo line-up.

The left-most vehicle in the image seems to be an all-new electric SUV concept that will most likely preview the next-gen XUV500 SUV. The new XUV500 is due to launch in 2020 with petrol and diesel engines. The new XUV500 will be new from the ground up but will offer three rows of seating just like its predecessor.

The second vehicle from the left teases the electric version of the XUV300 SUV, likely to be called Mahindra eXUV300.  The electric SUV will be shown in close-to-production form at Auto Expo 2020. The eXUV300 Mahindra will likely be powered by a near-130hp electric motor and energy will be provided by a 40kWh battery pack capable of delivering a range of above 300km on a single charge. The eXUV300 is expected to be offered with two battery versions – a more affordable version and a pricier, long-range version. The eXUV300 will support AC, as well as DC fast-charging and be the first product with battery cells developed exclusively for India applications by LG Chem – a Korean battery manufacturer that has been collaborating with Mahindra in the field of advanced lithium-ion battery technology. The production-spec eXUV300 will launch in 2021 and will be a key rival to the recently launched and aggressively priced Nexon EV in our market.

The third vehicle in the teaser is the eKUV100, which Mahindra will showcase in its final production-spec model. The eKUV100 is expected to be on sale in the April-June 2020 period.  The company is aiming for an aggressive price for its smallest electric SUV and has confirmed that the starting price of the model will be under Rs 9 lakh.  The production-spec eKUV100 will deliver a range of 130-150km on a single charge. The company will target the fleet segment with this model initially.The fourth vehicle in the image will be Mahindra’s quadricycle. This new vehicle will be a Bajaj Qute rival in the Indian market and will come with an electric power train as well and will be aimed at tier-II and tier-III cities.

The above mentioned EV range will be part of an 18-vehicle line-up by the brand as announced earlier. The company however, will not unveil the next-gen Thar at the Auto Expo 2020.