Three-door test mule of the all-new Defender imported into the country for testing purposes; global debut expected later in the year. 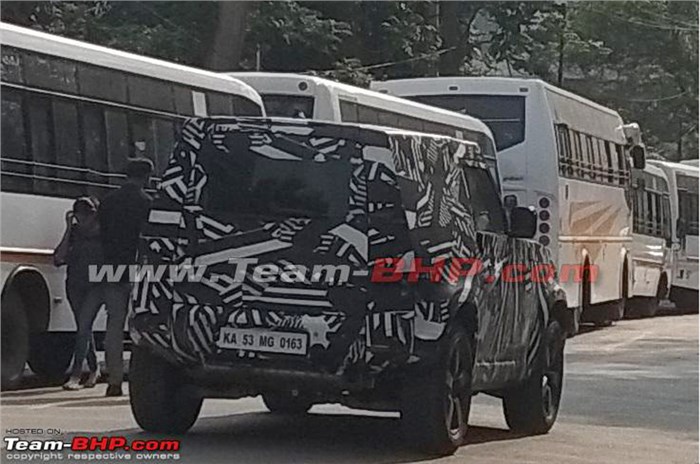 A test mule of the upcoming all-new Land Rover Defender has been spotted in Bangalore ahead of the model’s global debut later this year. The test mule was based-on the short-wheelbase three-door body-style of the iconic off-roader though it lacked the rear-mounted spare wheel seen on many of the test mules.

Given that it is registered to Tata Consultancy Services, the test mule is mostly likely being used to test components such as various in-car software and sensors. The current model has been undergoing extensive testing across the globe on public roads, test tracks and in extreme climate conditions.

Land Rover has also provided a prototype to an elephant protection NGO – Tusk Trust – in Kenya to traverse a 1.4 lakh sq m reserve while hauling supplies and towing loads.

JLR had previously also been seen testing the new Evoque around the city, earlier this year, with the model expected to arrive in India in the second half of 2019.

The new Defender is set to be offered in a choice of lengths ranging from a short-wheelbase three-door model and a larger five-door model. Also likely to be on the cards is a long-wheelbase version positioned above the regular five-door version. Land Rover is expected to offer a wide choice of variants for the all-new Defender – ranging from a basic utilitarian model to a luxury high-end SUV.

As seen from the images, the new Defender will continue to follow the boxy and upright design while also featuring design cues in line with the company’s latest design language.

Under the hood, the new Defender is set to use JLR’s Ingenium series of engines along with the brand’s suit of off-road hardware and four-wheel drive system.

When it launches in global markets, the new Land Rover Defender will take on the likes of the Toyota Land Cruiser and the Mercedes G-class.