We’ve compiled all the technical details of the new i20 to see how it compares to other premium hatchbacks. 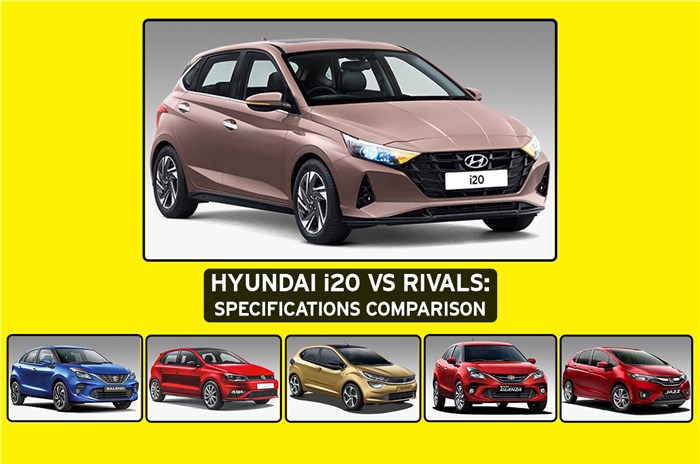 The all-new Hyundai i20 has just been launched in India, with prices starting at Rs 6.80 lakh for the petrol versions and Rs 8.20 lakh for the diesel versions. As with its predecessor, the third-gen Hyundai i20 is also going to compete in the premium hatchback segment, taking on the likes of the Tata Altroz, Maruti Suzuki Baleno, Toyota Glanza, Volkswagen Polo and the Honda Jazz.

We have put together all the technical details of the new Hyundai i20, like its dimensions, engine and gearbox options, to see how it compares against its rivals on paper.

New Hyundai i20 vs rivals: Dimensions

The all-new Hyundai i20’s dimensions have grown in almost all categories when compared to the outgoing model, as it is 10mm longer, 41mm wider and has a 10mm longer wheelbase. The only dimension that has remained unchanged is its height (1505mm).

It is also worth pointing out that, at 2580mm, the new i20’s wheelbase is the longest amongst its rivals. This bodes well for the amount of legroom on offer. The Honda Jazz continues to have the largest boot, though only by a small margin as the Altroz is only 14 litres less. The Volkswagen Polo has the smallest boot in the segment, being 60 litres smaller than the segment leader.

In terms of width, the third-gen i20 comes out on top, with the Tata Altroz coming in second. The Honda Jazz is the narrowest model in this comparison. Also, while all the models in the segment ride on 16-inch rims (at least in their top trim-levels), the Jazz again stands out for its smaller 15-inch wheels.

The all-new Hyundai i20 comes with two petrol engine options. The first is the 1.2-litre, four cylinder petrol which makes 83hp when paired to the 5-speed manual and 88hp when pared to the CVT. The second is a 120hp, 1.0-litre, three cylinder turbo-petrol with 6-speed iMT (clutch-less manual) and 7-speed dual-clutch automatic options.

With the Baleno RS discontinued, the new Hyundai i20 with the 120hp, 1.0-litre turbo-petrol engine is the most powerful premium hatchback, though, the Volkswagen Polo’s 110hp, 1.0-litre TSI turbo-petrol engine is not far behind. As before, the Honda Jazz continues to have the most powerful naturally aspirated engine, as it produces 90hp, though with the least torque (110Nm).

The mild-hybrid Baleno and Glanza also have equivalent horsepower figures. The Altroz is the only model here that doesn’t get a petrol-automatic option, though there is a dual-clutch unit in the works.

The BS6 era has witnessed many carmakers dropping diesel engines from their line-ups and as a result, only the Hyundai i20 and the Tata Altroz feature diesel engines.

The Maruti Baleno, Volkswagen Polo and Honda Jazz all ditched diesel power in the transition to BS6, while the Toyota Glanza never got a diesel engine to begin with.

The new Hyundai i20’s diesel engine is the same 1.5-litre four-cylinder unit seen in the Creta and Venue. In this iteration, the unit makes 100hp and 240Nm of torque, which is the same as in the Venue. What this means is that the new i20 has the most powerful diesel in the segment, as the Altroz’s engine only puts out 90hp. Neither of the models get an automatic gearbox option.