MG Motor India’s first SUV for the market is being benchmarked against the Hyundai Tucson and Honda CR-V. 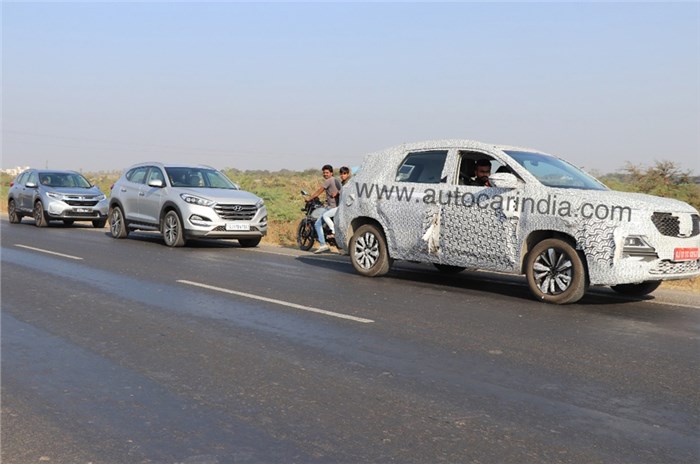 The MG Hector has been spied on test again, with the latest image showing the carmaker’s first model for India being benchmarked against the Hyundai Tucson and the Honda CR-V. The spy shot has also revealed minor details about the new SUV’s exteriors.

The images show that the Hector gets a wide honeycomb grille with the MG badge at the centre, a dual-headlamp setup with thin LED DRLs above and the main headlight unit below, and alloy wheels of similar size to its rivals; the CR-V gets larger 18-inch wheels while the Tucson gets 17-inchers. The image also shows a significant overhang at the rear.

Considering the Hector is longer and taller than the Tucson and the CR-V, the five-seat MG SUV is expected to be more spacious on the inside. The interiors of the Hector are also likely to be quite plush and upmarket, especially in the higher-spec trims. Leather seats and soft-touch materials on the dashboard, along with chrome around the AC vents are expected.

In terms of features, the Hector is expected to outdo its prime competition, with a 360-degree camera being part of the equipment list. The display for the same will be a portrait touchscreen infotainment system mounted at the top of the centre console. Other expected kit includes a panoramic sunroof, rear AC vents, a TFT multi-info display, power adjustable seats, cruise control and an electronic parking brake.

Like its rivals, the Hector will have a petrol and a diesel engine option. Power figures for the 1.5-litre turbo-petrol and 2.0-litre diesel motor are expected to be in the region of 170hp apiece. This means the Hector petrol would be more powerful than the comparable Tucson (155hp) and CR-V (154hp) petrols. On the other hand, the Hector diesel will outclass the CR-V’s 120hp diesel but will be down on the Tucson diesel’s 185hp. Previous spy shots had shown the MG SUV with an automatic gearbox. The Tucson gets 6-speed manual and automatic options while the CR-V has petrol-CVT and diesel-torque convertor automatic options. The two rivals also get all-wheel drive in the top-spec diesel forms.

MG Motor India claims that it has achieved 75 percent localisation of parts at SAIC’s plant in Halol, Gujarat, which should help in pricing the Hector competitively. The SUV goes on sale in mid-2019.