With a view to reduce emissions and boost fuel efficiency, MG Motor will offer a segment-first 48V mild-hybrid variant of its first SUV for India. 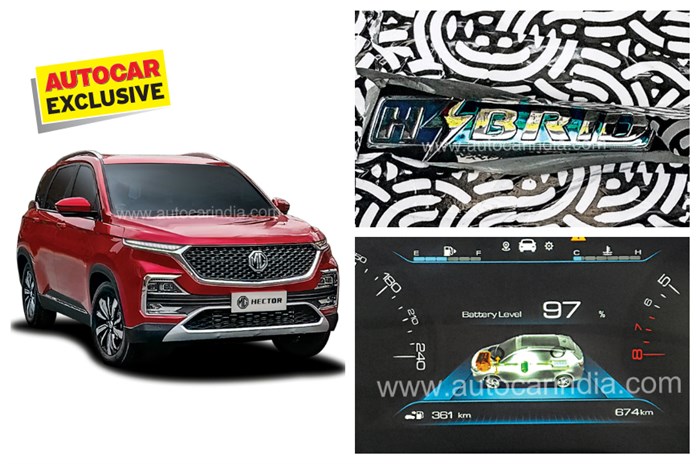 Much is known about the upcoming MG Hector already but we can now confirm the SUV will come with a petrol-hybrid option in addition to the petrol and diesel engine versions. The MG Hector hybrid will use a 48V mild hybrid system. Compared to a full-blown ‘strong’ hybrid, a mild-hybrid system has a far simpler (read cost-effective) setup, but still brings a number of benefits. Paired to the 1.5-litre, 143hp turbo-petrol engine, the 48-volt mild-hybrid system in the MG Hector will provide up to 20Nm of additional torque at low speeds that will help counter turbo lag and allow improved acceleration in stop-start city traffic. Additionally, the Hector hybrid will also feature regenerative braking, which will use the vehicle’s kinetic energy to recharge the 48-volt battery, and an automatic engine stop-start system that’ll switch the engine off at idle speeds to save fuel.

While the MG Hector’s mileage per litre isn’t known yet, the mild-hybrid variant is said to be nearly 12 per cent more fuel-efficient than the standard petrol variant, which would make it nearly as efficient as the diesel variant. And with the cost of upgrading to BS-VI emission standards set to make diesels even more expensive, the mild hybrid variant of the Hector will undercut the diesel variant’s price by a big margin. Additionally, the high efficiency afforded by the mild-hybrid system will help MG Motor meet tightening Corporate Average Fuel Efficiency (CAFE) norms. The lower emissions (reduced by 12 per cent compared to the standard petrol variant) will also help the Hector counter the anti-diesel wave. That said, the Hector will also come with a 2.0-litre diesel engine.

MG’s parent company SAIC Motor is betting big on electrified cars, or “new energy vehicles”, as they’re more commonly known in China. MG also wants to be known as a manufacturer of electric and hybrid vehicles, and has previously confirmed it will bring the all-electric eZS SUV – with a range of 428km – to India in Q4, 2019.

The MG Hector’s launch in India is set to take place in a couple of months’ time, and its rivals will include the Tata Harrier, Jeep Compass and Hyundai Tucson. And while it will be loaded to the gills with equipment, the MG Hector’s price is expected to be competitive, ranging from Rs 15-20 lakh (ex-showroom).

Would you be willing to pay more for the mild-hybrid variant over the standard petrol version? Let us know in the comments.