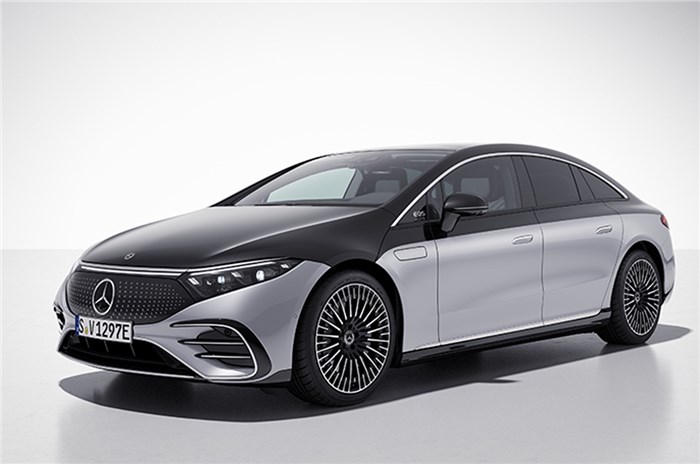 Mercedes EQS will be assembled at the carmaker's plant in Chakan.

It started with the local assembly of luxury limousines like the S-class and then expanded to the super-luxury Maybach and high-performance AMG brands, and has now been extended to the world of high-tech luxury EVs as Mercedes Benz confirmed local assembly of its upcoming EQS luxury EV sedan at its plant in Chakan, Maharashtra in 2022.

Moreover, the EQS will be one of the 10 new Mercedes models launched in India in 2022. Read on to find out more.

What is the Mercedes EQS?

The EQS is the brand’s first all-electric luxury limousine, which, as its nomenclature suggests, is touted to be the ‘S class of EVs’. More than that, however, it’s the brand’s first ‘born electric’ EV built on a dedicated electric platform known as EVA, and not derived from an existing ICE model, as are the EQC, EQA and EQB.

Potentially surpassing even the S class’s level of luxury thanks to its silent powertrain and greater interior space afforded by its born-electric platform (the standard-wheelbase EQS is said to offer the same rear-seat space as the long-wheelbase S class), it certainly is more than a match on the tech front, with features like the ‘Hyperscreen’ – three interlinked screens that span the width of the dashboard.

It’s unclear which version of the EQS will be launched in India – the 334hp EQS 450+ or the 523hp EQS 580. Both use a 107.8kWh battery with a claimed range of up to 770km, as rated by WLTP. There is also a high-performance AMG EQS 53 model, which could also potentially come to India at a later stage.

Why is India assembly of the EQS significant?

That Mercedes has announced local assembly of the EQS before the car is even launched is a big statement. Sure, there might be a limited run of ‘Launch Edition’ models brought in as full CBU imports for the first lot of customers, as was done with the new S Class and several other Mercedes models, but locally assembled units are likely to go on sale in the last quarter of the year.

The reason for this time-frame is that the Chakan plant will not only require upgrades to accommodate to the electric powertrain of the EQS, a vehicle which, of course, doesn’t share a platform with any existing locally built model, but the staff will also need to be trained to build this new model with its unique powertrain.

It’s also a show of the brand’s commitment to EVs in India. The EQC may have been the first luxury EV in India, but Jaguar soon followed with its I-Pace, as did Audi with three versions of the e-tron SUV and the e-tron GT four-door coupe. All those models, however, were full CBU imports, and with local assembly of its flagship EV, Mercedes could take the upper hand and take the lead from the top of the pyramid.

And with the commencement of EV local assembly with the EQS, it opens up the door for future EVs, like the upcoming Mercedes EQE that’s built on the same EVA platform, to be locally assembled with ease.

Apart from the announcement of EQS local assembly, Mercedes has confirmed that we will see a number of new model launches in the coming year, and that they will come from all four of the company’s sub-brands. Mercedes Benz cars and SUVs are likely to account for the major chunk of these, and will likely include the new C class sedan.

We will also see the new Mercedes Maybach S 580, the stretched, more luxurious version of the S class, to be launched in March 2022, which will likely also be locally assembled at Chakan. From the high-performance stable in Affalterbach, the Mercedes AMG GT Black Series will be launched, while the GT 63 S e-performance and all-new SL roadster could potentially join those ranks.

As for the EQ electric brand, it doesn’t stop with the EQS, as we will likely also see the EQC SUV reintroduced, and the introduction of the AMG EQS 53, the new EQE sedan, and possibly even the EQB small SUV.

Which new Mercedes launch are you most excited for in 2022? Let us know in the comments section below.